As I’ve mentioned before, I’m not usually one to keep a list of everything I read or watch, but in 2014 I kept a list of books I had read, in part because I was conscious that I wasn’t reading as much as I used to. Although the number this year is relatively small, I’d say the mixture of non-fiction and genre fiction is fairly typical of my reading in the last few years. The list includes some graphic novels and collections of comics, but not single comic book issues (which I’ve also fallen way behind on). It’s also influenced by subjects I was writing about; however, it only includes books I read from cover to cover, not those I dipped into for reference. Finally, all but one was a first-time read, although I had read parts of some of them in the past.

February
The Look of the Old West, William Foster-Harris

August
The American Book of the Dead, Stephen Billias (reread)

October
Showcase Presents Captain Carrot and His Amazing Zoo Crew, various
All The Wrong Questions: “Who Could That Be at This Hour?”, Lemony Snicket
The Maltese Falcon, Dashiell Hammett

December
The Lost Worlds of Power, ed. Philip J. Reed
All the Wrong Questions: “When Did You See Her Last?”, Lemony Snicket
Crab Monsters, Teenage Cavemen, and Candy Stripe Nurses: Roger Corman: King of the B Movie, Chris Nashawaty

Much of my thinking on what I read this year has already been included in the articles to which they are linked, and since most of what I read was published before 2014 and is in a diverse range of genres, ranking them seems pointless. I am struck, however, by how long ago some of the books I read in the spring seem to me; I might not have remembered that I read them this year at all without this list, instead consigning them to a hazy, indistinct “past,” even though I enjoyed many of them. To tell the truth, even September seems a long time ago from this vantage point. Such is the telescoping effect of the end-of-year holidays, I guess.

It strikes me, however, that I began and ended my year with two very different books that explored the rush of unbridled creativity in different formats. (Sorry, Batman: Odyssey, I don’t mean you, although you were memorable in many ways.) Brandon Graham’s King City is a graphic novel set in the futuristic metropolis of the title; its central character is a young man returning to his old stomping grounds after training with a mysterious group that uses multi-talented cats as weapons (yes, it is quite strange, but that description doesn’t even scratch the surface). In Graham’s notes (which I am paraphrasing, as I borrowed the book from the library and don’t have it in front of me), he said that King City‘s plot was guided by his desire to only draw things that were exciting to him: to not bore himself. Such an impulse could have led to disaster, but tied to a strong sense of craft, it makes for an immersive, invigorating read, with its weaponized cats, ultra-violent gangs, sexy girls, and graffiti-filled urban vistas that are part Moebius and part Mad magazine.

At the other end (and just finished today, in fact) was Chris Nashawaty’s pictorial/oral history of influential director/producer Roger Corman’s career, from his days cranking out cheapies for the drive-in market to his nurturing of young (and affordable) talent, to his eventual recognition as a Hollywood elder statesman. The book includes reminiscences from such graduates of “Corman University” as Martin Scorsese, Joe Dante, and James Cameron, to name only a few. I was somewhat familiar with Corman’s career and working methods, and of course many of his films; Corman, and “mavericks” like him, continue to inspire because of their perseverance and determination to create in the face of low budgets, limited time, and (in many cases) lack of prestige. Corman and his crew made a virtue of such limitations, but the many anecdotes about making films show the value of committing to do one’s best work, whether on a pointed political statement like The Intruder or on the many monster, biker, and women-in-prison movies that Corman made on an assembly-line basis.

Tomorrow, I look back on the movies I watched this year. 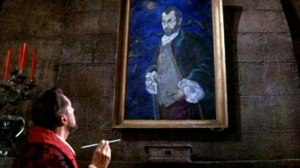 During last month’s horror movie marathon I caught up with several film adaptations of stories by H. P. Lovecraft. I first wrote about two fairly faithful twenty-first century adaptations by the H. P. Lovecraft Historical Society at The Solute, and after much delay I’ve put together my impressions of three films from American International Pictures: Roger Corman’s The Haunted Palace (1963), and Daniel Haller’s Die, Monster, Die! (1965) and The Dunwich Horror (1970). Although as a recovering Lovecraft purist I was skeptical of the AIP adaptations, I did find much to enjoy in them, and watching all three in a row provided an interesting overview of horror’s changing face in the 1960s. The article can be read at The Solute.