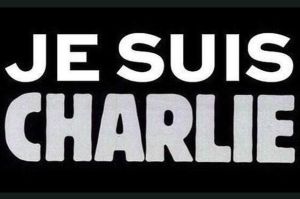 I wasn’t a reader of Charlie Hebdo, but I’m as shocked as anyone by yesterday’s terrorist attack on the offices of the satirical magazine in Paris, a premeditated shooting that left twelve dead. Like many of the people around the world who are responding to the attack with expressions of solidarity, I’m horrified by the concerted attempt to shut down free expression through intimidation and violence.

France is arguably the cradle of free speech in its modern form, given expression by such Enlightenment thinkers as Voltaire and Beaumarchais, but it is also more vulnerable to terrorism than the United States, both geographically closer to the Middle East and home to a much larger Muslim population than the United States. It goes without saying that radical Muslims are a small minority, but relations between the majority and minority cultures in France are fraught. (I’ve spent some time in France, mostly as a child, so I’ll limit recollection of first-hand events to recalling that I was advised not to speak English loudly or be seen reading English-language newspapers on the Metro: during the 1980s, a period of tension with Iran, it was considered wise not to advertise your Americanness, although I’m sure I could hardly help it.)

Situations in the U. S. and France are not exactly comparable, of course. Still, it is striking that the attack on Charlie Hebdo happened on the same day that I read about Kirby Delauter, a Maryland politician who threatened to sue his local newspaper for using his name and likeness without authorization because it was publishing stories about him that he didn’t like.

To be fair, Delauter’s threatened lawsuit (a suit which would be laughed out of court, if he could find a lawyer willing to pursue it at all) is hardly in the same category as a shooting spree. However, it reveals a similar mindset, a hostility to the free press and its tendency to print truths or opinions outside of the subject’s control, and the message to writers is the same: don’t stick your neck out. (To his credit, Delauter has apologized for his comments.)

It’s a mindset revealed in the wake of last year’s massive Sony hacks and the subsequent withdrawal of the studio’s comedy The Interview (which depicts the fictional assassination of North Korean dictator Kim Jong-un) from wide release. There are still disagreements over whether North Korea was actually behind the cyberattack, but the fact remains that the authoritarian country was happy to take credit for it and that it is still a place where open criticism of the Dear Leader is grounds for imprisonment or execution.

In both the case of Charlie Hebdo (which regularly ran cartoons skewering Muslim fundamentalists, including irreverent depictions of Mohammed) and The Interview, one could argue that the humor on display is tasteless, even offensive. It is especially offensive expression that needs protection, however: articles or cartoons that offend no one hardly need protection, do they? In any case, the magazine’s staff were fully aware of the risks they were taking (having been the targets of threats and arson previously) and felt the threat itself was reason enough to keep pushing: as editor Stéphane Charbonnier (who published as “Charb” and was among the dead) told Le Monde after another threat in 2012, “When activists need a pretext to justify their violence, they always find it.”

It is tragic that such words now form Charbonnier’s epitaph, but if they are remembered and taken seriously, we can learn from them. Those who attacked Charlie Hebdo believe they are sending a message, but the clear meaning is the opposite of what they intend: the answer to offensive speech is more and better speech, and participation in civil society, not bullets and intimidation. Perhaps that sounds naïve, and is easy to say from my relative safety in the U. S., but it is a principle worth standing by. As one of Charlie Hebdo’s own headlines read, “Love is stronger than fear.” In the wake of these attacks, Nous sommes Charlie. 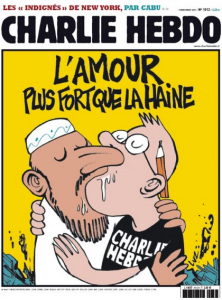