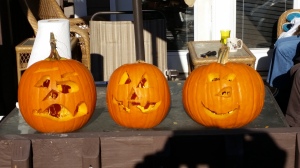 Or is it the cruelest? There’s always too much to do and too many events to take advantage of them all during October, between post-season baseball, family Halloween activities, school and work, rehearsals and performances. (I should also mention that The Lost Worlds of Power, which was supposed to be released on Halloween, has been delayed, for reasons best explained here. No worries; I’ll update as I get information.) This year my wife dressed as the Queen from Snow White, and we thought of a costume for me that (I think) came together really well:

Then there are the movies: a lot of people plan to watch 31 horror movies during October, a movie a day; I knew I would have a hard time reaching that number (and as the month went on I remembered why I had never done it before), but this year I made an effort to catch up on some I had never seen (while revisiting a few favorites). I made it to 21 and still felt like I was cramming them in; as enjoyable as it was, I doubt I’ll try to keep up this pace year-round.

I didn’t plan ahead, for the most part, and for those I saw on the big screen the programmers of the October at the Oldtown horror series made the decisions for me. For my own choices, I defined “horror” pretty broadly, and included some examples of fantasy and thriller, depending on my mood. (Pulp Fiction, which I rewatched in order to write an article on its twentieth anniversary, is the real outlier.) 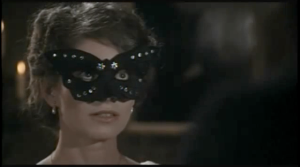 Barbara Kellerman in The Monster Club

The movies I covered are listed below with their year of release and director, as well as a key pointing out a few repeated elements. For example, five of the movies I watched in October were adaptations of stories by H. P. Lovecraft (I wrote about two of them at The Solute, and intend to write about the remaining three in the near future), and considering I didn’t watch any martial arts movies there were a surprising number of samurai sword attacks.

Did I miss anything? And did you watch anything in the last month that you would recommend or that made an impression on you?