I’m not really the kind of book collector who fusses about rare items or first editions; it’s nice to find those sorts of things, and I can appreciate a beautifully-bound book as a work of art in itself, but I mostly think of collecting books as building a library for reference or enjoyment.  When I was younger, and mostly reading science fiction and other genre material, I would pursue books and authors that connected with one another in some way: the Cthulhu Mythos and the Weird Tales school; or the books listed by Gary Gygax as influences on Dungeons & Dragons; and, later on, steampunk and the nineteenth-century authors who influenced it.  When I became a graduate student and teacher, my library of music books–theory, history, and other kinds of reference–burgeoned. Along the way, I’ve picked up books of art, criticism, and aesthetics that caught my interest.

Space is always an issue, of course, for the private library as much as the public (even if it’s on a smaller scale).  Although my rate of accumulation has slowed a great deal over the last several years–I no longer have the time, space, or funds to simply buy anything of interest that I come across–I still have more books than the shelf space to accommodate them, and choices must be made.  I have tried to prioritize books that I expect to refer to, or which I haven’t read yet but would like to, but one never really knows. That’s part of the point of keeping a library, isn’t it?  (I’ve never been able to keep a strict reading list and stick to it, simply because most of the books I read suggest the next book to me: I don’t know what it will be until I’ve finished the last one.)

In one house I lived in, I had a bookshelf in the living room full of classics, some of which I had read and others I hoped to get to, lumped together by the single commonality of their supposed importance.  In the guest bedroom, however, were the books I really read, the Stephen King and Philip K. Dick, the reprints from the pulp era and the books on UFOs and unexplained mysteries.  The house I’m in now I’ve been in a little more than a year, and while the display of my books is a little less showy and two-faced, it’s still the result of practical compromises, so while much of my library looks like this: 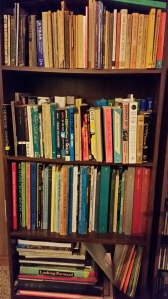 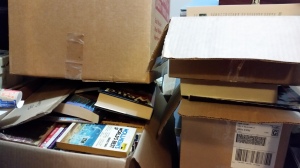 There are different motivations for collecting, and my motivations have changed over the years.  One of the first impulses is simply to have a collection as a form of mastery: the completist urge, to have a matched set, to have at your fingertips anything you might want to experience or refer to.  This notably affects record collectors in particular, but any kind of collector can fall prey to the need to fill in gaps, to have a satisfyingly whole body of work to dive into or simply stand back and regard.

Not unrelated is what we might call the scholarly impulse: as I’ve been discovering over the last ten months, since I started writing this blog, you can only write off the top of your head for so long before you need to pull in an apposite quote or factoid for support.  In my case, I’m blessed with a decent memory, good enough to recall something I read years or decades ago that bears on my present topic, but cursed in that it isn’t a photographic memory, and if I want to get a quote right I have to remember where I read it and dig up a copy to refresh my memory and ensure accuracy.  The internet and the public and university libraries have all helped, of course, and I’m not too proud to admit that more than once I’ve borrowed a book from the library that I already owned because it was faster to do that than hunt down my own copy.

Lately, I’ve been digging into those boxes more frequently in search of specific books that I know I’ve got, if I can just remember which box I packed it in.  Doing so makes me feel less like a librarian and more like a hoarder, but it’s vindicating when I find what I was looking for, especially when it’s something I remember not by name but by the picture on the cover, or by a general sense of “I’ll know it when I find it.”

Henry Petroski’s absorbing book The Book on the Bookshelf (which, ironically enough, I don’t have at my fingertips right now) goes into both the history and methodology of organizing books and discusses the problems I’ve alluded to here. In addition to such well-known systems as the Dewey Decimal and alphabetization by author’s last name, Petroski points out that there are many other ways of ordering libraries, some of which sound far-fetched but aren’t that crazy, at least for private collections. While we don’t organize public library books by size or color, for example, my own searches indicate those are just as useful for finding half-remembered books as titles or authors (books that are packed in boxes are often packed together based on size and shape rather than complementary subject matter!).

All of this comes to mind after another round of shifting and unpacking boxes to find a few supplementary books for my ongoing series on motion picture serials, but I went through something similar last fall when writing a series on anthologies of different kinds (both are listed on my Series page, for those wanting to catch up).  I’ll probably never have everything I own all out in the open, at least not until such time as I’m able to move into a house with shelves on every wall.  It doesn’t help that I’m not a specialist, limiting my work to a core collection of volumes on a single subject.  For now, at least, I’ll make due with a rotating collection, following my fickle muse.