Recent news that the license to publish Star Wars comics would shift from Dark Horse to Marvel in 2015 probably didn’t come as a surprise to anyone: now that both Lucasfilm and Marvel are under the umbrella of Disney, it was only a matter of time before corporate synergy asserted itself.  Already, Disney-owned properties such as the Muppets, Darkwing Duck, and the Pixar characters have been withdrawn from licensee Kaboom! (not all of them to reappear at Marvel, at least so far).  It’s too bad: Kaboom! publishes some of the best comics for children around, and their books were clearly being written and drawn by creators with knowledge of and affection for the characters.  Still, it makes business sense for Disney to consolidate its holdings, now that it has film, animation, and comic book outlets at its disposal.  I don’t blame them at all; I’m sure it was part of their plan in acquiring those companies in the first place. 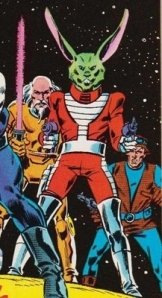 The news has stirred up memories of the often-wacky Marvel Star Wars line that ran from 1977 to 1986, and there have been a lot of jokes at Marvel’s expense.  Heck, I’ve sprinkled Twitter and WordPress with my share of comments about the Zeltrons, a race of pink-skinned empaths whose sexual openness was often a source of comic relief (and pinup-worthy cheesecake) in the series.  No one would deny that Marvel’s version of George Lucas’ science fantasy epic is more remembered for six-foot tall green rabbits, horny pink-skinned aliens, and a seriously off-model Jabba the Hutt than for its merits, especially in comparison to the more straight-faced Dark Horse run. 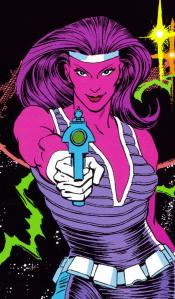 Although some of Marvel’s contributions to the Star Wars canon have been picked up and used by others (including the Zeltrons, actually), its run was compromised by its publication alongside and in between the release of the original trilogy’s films.  Before Star Wars (sorry, A New Hope) was released, Marvel was already publishing its six-issue adaptation, including scenes that were cut from the final film: most notably Luke’s conversation with Biggs on Tatooine and Han Solo’s confrontation with a very different-looking Jabba the Hutt in Mos Eisley.  The yellow-skinned, humanoid version of Jabba would appear a couple of times in the comics, until he officially disappeared from existence, replaced by the slug-like Jabba of Return of the Jedi. 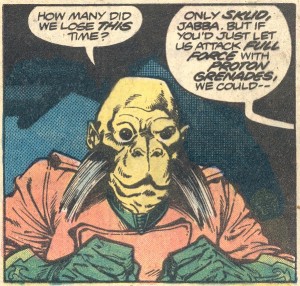 To be fair, it can’t have been easy for the writers (including Roy Thomas, Archie Goodwin, and Mary Jo Duffy, among others) to spin stories out of a saga that wasn’t completed yet: the challenge was to give readers more of what they loved in the movies without deviating too far from formula or accidentally contradicting or giving away plot twists planned for the sequels (plot twists that were generally secret–Marvel’s editors wouldn’t always know they had crossed the line until it was too late).  Particularly between The Empire Strikes Back and Return of the Jedi, writers were tasked with providing the illusion of change so familiar to readers of superhero comics: Han Solo could not be freed from his carbonite imprisonment, although many issues were dedicated to attempts to rescue him; Darth Vader was off the table, so there could be no answer to the question: was he Luke’s father?

Some of the weirdness in Marvel’s version was also due to the relationship between licensor and licensee at the time.  In those days there was simply not the expectation that film and comics be a seamless continuity: comics were exercises in brand extension, ancillary revenue streams, not sacred texts.  To a large degree, the comics’ writers and artists treated the Star Wars universe as just another sci-fi/fantasy playground to be filled with weird landscapes and monsters (one story arc was repurposed from unused John Carter, Warlord of Mars artwork).  Remember, this was from the same decade as Jack Kirby’s adaptation of 2001: A Space Odyssey and Whitman’s adaptation and continuation of The Black Hole.  Making up and adding material was thought of as giving good value to the reader.  Star Wars and its Expanded Universe would be a major influence in shaping fans’ expectations of continuity across all media, but that tighter approach didn’t emerge overnight.

Still, before I was a Marvel kid I was a Star Wars kid, and the latter was a big reason for the former.  I remember vividly the discovery that piqued my interest: in the box of comics I shared with my sister (about which I’ve written previously), I discovered a copy of Star Wars number 18, missing its cover.  This was the first issue of a major story arc in the early days of the series, the “Wheel” saga, named after a huge space station-bound casino that is the setting of the action.  I didn’t know that at the time (1982 or ’83, I would guess), and it would be a few years before I was able to read the “Wheel” arc in its entirety.  What captivated me was the idea that the characters I knew from the movies were having entirely separate adventures in these comics.  I tended to accept anything official-looking as gospel, so I had no trouble accepting the legitimacy of Marvel’s version (although Carmine Infantino’s square-jawed rendition of Luke Skywalker looked more like He-Man than Mark Hamill). 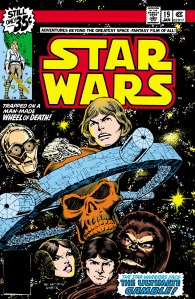 For the first time, I became a regular comic buyer, actively looking for new issues on the stands and seeking out back issues to fill in my collection.  Jumping into the series, there were many unfamiliar characters and references to previous adventures from the comics.  I had a lot of catching up to do.  I didn’t live anywhere near a dedicated comic book store, so I relied on trading with friends and mail order: the biggest comic book purchase of my childhood, in fact, was an order for all the Star Wars issues that were available from one of Mile High Comics’ summer sales. Mile High’s yellow two-page ads were once a common sight, and the summer sales were the best, unloading comics for 25 or 50 cents apiece.  It helped that, aside from the first few issues, Star Wars had never been terribly sought-after or valuable, and at most they were only a few years old.  The day the box arrived in the mail with forty issues or so—far from a complete run, but more than I had ever read at once and including many gems—I holed up in my room and immersed myself in “a galaxy far, far away.”  It would be the first of many long afternoons delving into another world through comics.

One of the things I liked about the comics, and which still holds up today, was the focus they were able to bring to individual characters.  Many issues were solo adventures, or featured groups of only two or three characters working together in ways that the epic scope of the films didn’t always have time for.  In the comics you could observe Princess Leia as a diplomat waging high-stakes games of cat-and-mouse with Darth Vader and the Empire (in “The Third Law”); Luke Skywalker’s role in the Rebellion’s space fleet could receive more attention; Han Solo, and later Lando Calrissian, could be shown in their element as smugglers, gamblers, and “scoundrels” (in flashback, of course).  In essence, the Star Wars universe could support stories of action-adventure, espionage, horror, romance, and even comedy, much as the Expanded Universe still does today.  It made sense: the movies were themselves indebted to many different genres, including the science fiction serials of the 1930s and ’40s; Westerns; World War II aerial dogfights; and the samurai films of Kurosawa.  It was only natural for the comic book adaptations to continue in that spirit and flesh out elements that could only be implied on film.  Not all of the stories worked, and not all of the original characters fit into the Star Wars aesthetic, but I still remember them fondly, from the “Wheel” saga to the the twisty, long-running story of Shira Brie, to the many, many attempts to rescue Han Solo. 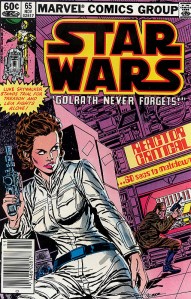 After Return of the Jedi, the Marvel series continued without much apparent purpose, introducing its own villains (the Nagai) and tying up threads from the comics.  The writing was on the wall.  I was a faithful reader until the end, but I couldn’t disagree with the decision to cancel the series after 107 issues: it had become a shadow of its former self, and by that time I had gotten hooked on Marvel’s superhero offerings.

I didn’t spend much time reading the Dark Horse series–I guess I was still a Marvel kid at heart–but from what I could see the quality was good, and they made a lot of smart decisions.  Unlike the Marvel series’ focus on the main characters of the film trilogy (understandable, but ultimately limiting), Dark Horse was able to flesh out the Old Republic and other settings within the Star Wars universe.  They even obtained the rights to the Marvel run and released it in a handsome series of trade paperbacks, a fitting tribute to an imperfect but often richly entertaining saga, and a challenge to the assumption that everyone involved would rather forget it existed.  With the distance of time, new and old readers alike can approach these adaptations, see that there was more to it than green rabbits, and make up their own minds.