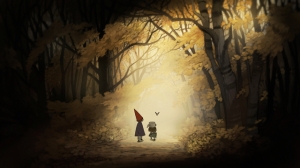 Last week, Cartoon Network ran its first animated miniseries, Over the Garden Wall, described as a “five night mystery adventure.” Created by Patrick McHale, previously of CN series Flapjack and Adventure Time, Over the Garden Wall leans on the traditions of fairy tales, classic animated cartoons, and much more, and featured enough star power (including such names as Elijah Wood and Wichita’s own Samuel Ramey) that it fully lived up to its “event” status. Over the Garden Wall also draws on the archaic, mysterious body of song and folklore collected in the Anthology of American Folk Music, described by Greil Marcus as “The Old, Weird America.” I’ve written before about my love for the Anthology, so it will not surprise my regular readers to find that Over the Garden Wall‘s synthesis of influences was catnip to me.

I wrote more about it in my review at The Solute; although television rather than a film, I felt that under two hours total (leaving out commercials, of course), Over the Garden Wall could be considered a ten-part feature, and works well in that format.