Years ago, I mentioned to a new acquaintance that Pee-wee’s Big Adventure was a favorite film of mine, and after I convinced him that I didn’t just think of it as a kid’s movie (it’s an all ages movie–there’s a difference), he asked me just what was Pee-Wee Herman’s deal. Like, what is he supposed to be? I suspect it’s a question that anyone who doesn’t see the appeal of Herman (the alter ego of actor/writer Paul Reubens) might ask. Pee-wee dresses like a stereotypical 1950s kid with a buzz cut and bow tie, delivers corny jokes and catch phrases in a swallowed voice, and appears to live in a candy-colored funhouse. The best answer I could come up with then, and still, is that Pee-wee is a “man child.”

There are plenty of television shows, movies, and comic strips featuring children who act like adults: hearing seemingly innocent children crack wise like Borscht Belt comedians or swear like sailors may produce cheap laughs, but they’re laughs nonetheless. On the more sophisticated end of the spectrum, Charles Schulz’s classic Peanuts and Berkeley Breathed’s Bloom County, among others, featured children who made sage observations about the existential dilemmas of life or filtered the political concerns of the day through their own experiences. And of course The Simpsons has been making a case for more than twenty-five years that Lisa is more intelligent, sensitive, and mature than her father. Heck, in many episodes Bart clears that hurdle.

The comedy of adults acting like children is trickier, however (witness “jerk-ass Homer” in some of The Simpsons’ weaker episodes), easily veering into the cringe-inducingly maudlin or obnoxious. This is where Pee-wee Herman, as a character, walks a fine line, and his role has changed in the various films and television programs he’s appeared in. In his earliest incarnation as a character Reubens performed on stage, Herman was a child, albeit one with a naughty streak; much of the comedy (as I recall it; it’s been years since I saw the stage show that was broadcast on HBO) emphasized the contrast between his innocent appearance and the mildly risqué situations he found himself in. Being taken for a goody two-shoes just made it easier for him to look up girls’ skirts or deliver double entendres.

Obviously Herman became more family-friendly after the success of Pee-wee’s Big Adventure and especially the Saturday morning TV program Pee-wee’s Playhouse, but there was still a sense that Pee-wee was a naif surrounded by more worldly characters. His distrust of feminine entanglement has been a common thread through many of his vehicles. I remember one sketch from his 1985 Saturday Night Live appearance in which a friend confesses his marital problems to Pee-wee, trying to explain in a roundabout way that he might need to find someone to help relieve his “needs.” After Pee-wee offers a series of increasingly ridiculous guesses as to what kind of person his friend is talking about (“an evil mailman”), he finally gives up and says, “Gee, why don’t you just get yourself a hooker?”

As the new film Pee-wee’s Big Holiday opens, Pee-wee is a more familiar kind of man child, an adult (he has a job and a car, for example) who likes his life just the way it is and resists anything that threatens to change it. His structured existence in the idyllic community of Fairville resembles both that of Jim Carrey’s character in The Truman Show and Steve Carrell’s in The 40-Year-Old Virgin (fitting, since Virgin director Judd Apatow produced Big Holiday). The cracks begin to show, however, when he puts off a pushy travel agent (Pee-wee hasn’t left Fairville since he had a bad experience) and a flirtatious librarian (see above re: feminine entanglement). The real crisis occurs when his band, the humorously clean-cut Renegades, break the bad news that they’re splitting up because the other members’ lives are taking them in separate directions. Pee-wee is so distraught that he burns their picture and breaks his flutophone in half.

Enter a cool, mysterious stranger (Joe Manganiello) who, despite his bad boy attitude and good looks (he pulls up on a motorcycle and wears a tight tee-shirt like Marlon Brando in The Wild One) has a lot in common with Pee-wee. They both agree on the superiority of root-beer barrels as the best candy in the world, and they hit it off over Pee-wee’s milkshake, which Manganiello declares “top five, all-time.” Pee-wee gives Manganiello a tour of Fairville, including the miniature model of the town Pee-wee has built in his backyard, but Manganiello is shocked when he realizes how sheltered Pee-wee is. He encourages him to hit the open road, “break some rules and break some hearts,” and as an incentive invites Pee-wee to his upcoming birthday party in New York City. 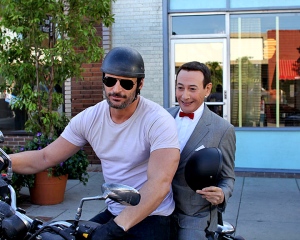 Manganiello is playing himself, sort of; I wasn’t familiar with him, so I was in the same boat as Pee-wee (although he played Flash Thompson way back in the 2002 Spider-Man movie, so I guess I did see him in that). Manganiello is a winning and hilarious foil to Pee-wee, “cool” in a more traditional way than Pee-wee but eccentric enough to fit into Pee-wee’s world. The best part about his character is that his friendship with Pee-wee is genuine: he really likes Pee-wee and recognizes in him a different kind of cool. Later, Manganiello’s anticipation for his birthday party and his deep disappointment when he thinks Pee-wee isn’t coming are fertile sources of comedy. Like Pee-wee Herman, “Joe Manganiello” is a childlike character, a child’s idea of a rich and famous star who rides a motorcycle around the country and throws lavish (but PG-rated) parties for himself when not acting.

With a motive to leave town, Pee-wee embarks on his journey, and from here the film is completely episodic, and like Big Adventure it consists of encounters with funny characters in a slightly off-kilter version of roadside America. Pee-wee is first carjacked by a trio of buxom bank robbers straight out of a Russ Meyer film, and after he escapes he hitches a ride with a traveling novelties salesman. Later, Diane Salinger (Simone in Big Adventure) turns up as a Katharine Hepburn-like heiress piloting a flying car. One of the running jokes and a constant for Pee-wee’s character is that while he’s good-natured, he isn’t a Pollyana, and while we trust that the world won’t be unnecessarily cruel to Pee-wee, he faces enough zany setbacks to make him (and the audience) wonder whether he’ll make it to Manganiello’s party in time.

While this version of Pee-wee is a little less trusting of the outside world, he still makes friends wherever he goes, and many of the episodes show him being encouraged by his new friends or learning to his surprise that he can handle the rough world outside Fairville. Whether he’s caught in an extended “farmer’s daughter” joke, hitching a ride with a group of sassy hairdressers, or adjusting to life in an Amish hamlet, Pee-wee sees the best in people, even when it would make sense for him not to.

Like many modern reboots and revivals of old properties, this “comeback” is packed with nostalgic callbacks and Easter eggs, remixing an older story by sprinkling in familiar themes, character types, and imagery to summon up the old magic. Instead of the dinosaur-themed truck stop in Big Adventure, there’s a touristy snake farm; the criminal supervixens recall both the movie archetypes that director Tim Burton incorporated into Big Adventure‘s world and more specifically the ex-con Mickey whom Pee-wee befriended in that film; and the famous “Breakfast Machine” from Big Adventure is homaged in an extended Rube Goldberg sequence that stretches all the way down the street from Pee-wee’s house and encompasses every aspect of his morning commute (I was waiting for a joke to reveal that Pee-wee can’t leave town because he spends so much time setting up this contraption).

I’m a big enough fan that I enjoyed those references, but I’m glad to say that the film has plenty of original gags, and that most of the material works well enough on its own, even if you’ve never seen a Pee-wee Herman movie before. And the film is fast-paced enough that jokes that don’t work are quickly left behind for something new. In addition, Pee-wee’s desperate desire to please his new friend and make it to his party is a slightly different dynamic than the search for his stolen bicycle in Big Adventure; after all, there was no risk that his bicycle might not be happy to be found. Unlike Paul Reubens, Pee-wee himself hasn’t aged a day: his voice is a little deeper in a few scenes, and there’s one scene toward the end where he looks a little like John Waters without the mustache, but in general he’s as timeless as the mash-up of time periods in which he lives.

Director John Lee (Wonder Showzen; The Heart, She Holler) captures the sincere but heightened tone of Pee-wee’s world quite well, proving his own surreal brand of humor more than compatible with Reubens’. The many comic performers in the cast are game and then some, and Dan Butts’ production design captures both the Norman Rockwell world of Fairville and the many different locations Pee-wee travels to. Musically, it’s hard to compete with Danny Elfman’s contributions to Pee-wee’s Big Adventure and the circus-themed Big Top Pee-wee, but former DEVO frontman Mark Mothersbaugh (whose film credits have included scores for Rushmore and The Lego Movie) provides an enjoyably quirky score; the highlight is a slightly cracked Leonard Bernstein-style salute to New York.

To sum up, I’m probably too close to tell you whether this is a fans-only proposition, but as a fan, I liked it. It’s not quite on the level of Pee-wee’s Big Adventure, but since I’ve already revealed that’s one of my favorite movies of all time, that’s no great criticism. It’s streaming on Netflix Instant now, so I invite you to give it a try. What have you got to lose?