It occurs to me that in delving into the history of recorded music, I have somewhat strayed from my stated purpose of looking at influential or personally important anthologies.  In this final installment of “The Pleasure of Anthology,” I’ll look at a work that is both: Harry Smith’s Anthology of American Folk Music.  Smith is a fascinating figure by himself, and the AAFM, which he put together for Folkways Records in 1952, is only a small part of his artistic output, which included experimental films, paintings, and poetry, as well as ethnographic research on American Indian rituals, string games, and dance (Smith studied anthropology in college, but had begun his studies even younger, visiting an Indian reservation near his boyhood home in Washington state and recording and interviewing members of the tribes there).  It is the AAFM, however, that has had the most enduring influence. 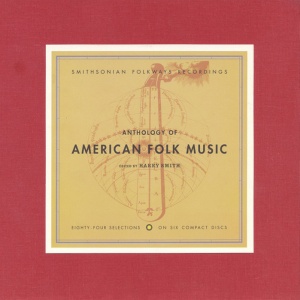 Peripatetic, Bohemian, obsessive Harry Smith has more in common with the anthologists like Bill Blackbeard than might first appear.  One of the primary accomplishments of his Anthology was to put an unacknowledged, even disdained, part of history front and center in the popular consciousness: the commercial recordings made by rural Southerners before the Great Depression.  Such records were produced by big Northern labels like Columbia and Okeh after they realized that people (both black and white) in isolated small towns would buy records made by people like them.  The countless 78s that Smith tracked down, collected, and sorted through held ballads, fiddle tunes, jug band stomps, and quasi-musical sermons, among other genres, either recorded on the spot by traveling recording outfits or in studios in Chicago or New York.  Almost all of these were relegated by their original labels to “race” or “hillbilly” lines, for black and white customers, respectively, and as such were promoted only in limited areas and then forgotten.  Not for these records would there be red labels or pink-paged catalogs.

Smith was one of many collectors scouring the countryside for old records—there had been a lively community of jazz and blues collectors, united by newsletters and fan-assembled discographies since the 1920s—but Smith was one of very few looking for “folk” music, and he was by far the most knowledgeable, generous with his learning if not with the records themselves.  (According to fellow collector Luis Kemnitzer, “He would lend out books that he thought you might want, gave away paintings and collages, but once a record came into his room it never left.”  Don’t we all know someone like that?)

Smith’s work was preservative, too: according to Smith’s longtime friend, poet (and founding member of The Fugs) Ed Sanders, “There was a big drive by the government to collect laminated records in order to secure the shellac for the war effort, so the records he was particularly seeking, from the 1920s and ‘30s, were in great danger of being wiped from history, a factor which may have given his collector-obsession an extra energy.  On the other hand, the government drive brought millions of records out of the attics of America, making them easy to find.”* As with the science fiction anthologists, passionate collectors like Smith not only chose the best examples of their medium to showcase, they effectively created new fields, new spaces for preserving and discussing cultural artifacts that might otherwise be forgotten.

The songs themselves sound much older than the mere two or three decades that separated them from 1952; listeners who had only been familiar with the music of polished groups like The Weavers were struck by the stark, ghostly quality of many of the voices and the sometimes eccentric quality of the music.  Even though many of the recording artists were professional musicians (on a regional level, at least), there is nothing slick or cookie-cutter about them; they have more in common with the rough-hewn, self-taught geniuses of the early jazz era, and in the best of these recordings there is something of the same energy.

The 84 recordings Smith chose are divided into three volumes: Ballads, Social Music, and Songs, each volume originally on two LPs.  Smith’s ordering and his brief, even telegraphic, notes are carefully considered to guide the listener through the not-so-distant but disappearing land that Greil Marcus called “The Old, Weird America.”  Smith saw the project as half scholarly and half an agent of cultural transformation, but he mostly lets the music speak for itself.  If there is an agenda beyond simply making the music more available, it might be found in Smith’s refusal to list or even acknowledge the race of the performers, instead emphasizing the connections that transcend segregation.  In Marcus’ words, “Linking one performance to another, he ultimately linked each to all”—an excellent description of what a great anthology can accomplish.

Everyone has their favorite disc in the Anthology; the Ballads and Songs of Volumes One and Three appear to have had the most influence on the contemporary folk movement, but the “Social Music” of Volume Two is mine.  Most of the tracks are instrumental, rhythmic fiddle or banjo music for square dancing (on “Georgia Stomp,” the fiddler calls the dance steps out as he plays), as well as what can only be called good-time party music (“Moonshiners Dance,” one of my favorites, sounds like a rural Spike Jones by way of an A&M college bash).  All of these dance numbers fit into the two- to three-minute span of a record side, but within that short time they create their own worlds.  There is a droning quality (in the literal sense of a repeated pitch or chord) that one easily associates with “primitive” music, to the diddly-bow or the monochord that fascinated Smith, and some of the music is genuinely archaic—pan pipes are represented, made of reeds cut by hand—but mingled with urban trends or Tin Pan Alley standards that show the creeping influence of radio and commercial sheet music.

There are songs on Volume Two, as well—not “Songs” as Smith defined them, but vocal music nonetheless.  I sometimes presented Jim Jackson’s heartbreaking “Old Dog Blue” as an example of a “floating couplet” proto-blues song when I taught Music Appreciation, an act of bravery (or foolishness) considering it’s hard for to listen to without getting choked up.  Like other songs on the Anthology that have been the focus of intense study, “Old Dog Blue” is at once crystal-clear on the surface—a reminiscence of a faithful hound, now passed away—and deeply mysterious, with seemingly biographical references (like “a little bitty girl with a red dress on”) thrown in, suggesting an entire life in the same way a white tip on the ocean suggests the iceberg beneath the surface.  Whether the lyrics are drawn from  Jackson’s memory, the common property of rural song, or consciously constructed by Jackson, the result is a song that seems to imply more than it says. The Romantics like Robert Schumann knew how evocative fragments could be, leaving gaps for the listener’s imagination to fill in: Jackson, and many of the other artists present, do the same, whether on purpose, or because of the limitations of recording, or simply because of the cultural gulf that separates us from them.

In the original booklet that came with the AAFM (reproduced for the lavish 1997 CD rerelease), Volumes Four, Five, and Six were promised, but they never arrived.  According to knowledgeable sources there were disagreements over the playlist between Smith and Folkways publisher Moses Asch, and Smith, ever temperamental, dropped the project.**  Later, Smith seems to have simply lost interest in this kind of anthologizing, moving on to studying quilt patterns and other, more physical, examples of folk life.  Within a few years of the original AAFM there was a flood of rereleases of similar material, fueled by the interest Smith had awakened.  It didn’t seem as important for him to continue since others had picked up the thread.  How short a creative period may turn out to be, especially for one with such diverse interests as Harry Smith: what may appear to be a mercurial temperament may simply be a restless intellect, always searching for new territory to explore.

*A comparable situation prevailed in the mid-1990s, when I was doing my most serious collecting: vinyl was considered dead, doomed to be replaced by CDs, and almost every garage sale or junk store had a crate (or several) of records at bargain prices.

** Following the CD reissue of the AAFM, a fourth volume was released on the Revenant label in cooperation with the Harry Smith Archives, based on a playlist Smith had compiled but with notes written by others.  Although it is little more than a footnote to the original AAFM, it’s still a worthwhile sequel, concentrating on music from the 1930s, and it includes songs that would become classics when reissued by others: Robert Johnson’s “Last Fair Deal Gone Down” and The Carter Family’s “No Depression in Heaven,” for example.  It is from the liner notes to Volume Four that I have drawn Ed Sanders’ comments.