This article was written as a tribute to Nathan Rabin, whose many columns on such diverse subjects as cinematic flops, Insane Clown Posse, and the ranking of the International Movie Database’s user-generated Top 250 have inspired me and other readers of The A.V. Club and The Dissolve over the last ten years. My look at Guardian of the Gods is inspired by Rabin’s long-running “Silly Little Show-Biz Book Club.” I wish “Nabin” good luck, wherever he lands next. 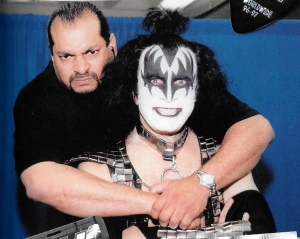 Andre Augustine with Kiss’ Gene Simmons (Simmons is on the right)

How silly is Guardian of the Gods, Mark Rodgers’ 1999 profile of rock-star security director/road manager Andre Augustine? Most of it isn’t that silly at all, actually. The silliest thing about it is its bombastic title (which actually appears in the text as the breathless answer to a bystander’s question, “who’s he?”), and a cover blurb that promises a book-length description of Augustine wrecking fools who dare to breach the security perimeter around the stars he’s sworn to protect. There are also a few passages that walk the fine line between PR puffery and ardent fanfic, like this description of Kiss in concert:

Gene prowled the stage as though looking for victims. Paul danced like a gazelle. Ace, his human form merely a vehicle for some cosmic musical force, played flawlessly. And Peter looked like he was driving the world’s most powerful Mack truck. The moment was truly surreal.

Most of the book, however, which outlines Augustine’s career from his early athletic experience (he had a stint as a linebacker for the New York Jets) to handling security for rap acts like Run-DMC and N.W.A. before transitioning to working with rockers Aerosmith, Bon Jovi, and Kiss (among others), is a sober-minded account from a music-industry insider. Rodgers promises up-front that the book is not a tell-all: although there are numerous anecdotes about Augustine’s famous clients, the emphasis is on the competence and professionalism of Augustine and his fellow “road warriors.”

In many ways, Guardian of the Gods is a business card in the form of a book: as Augustine was (and continues to be) active in the industry, it tells potential clients, “I take your safety and success seriously; I am discreet; you can trust me not to do or say anything that will make you look bad in public (unless your name is Ace Frehley, or you are a member of Nelson).” Augustine emphasizes his hatred of drugs and they are, for the most part, mentioned only as something in the artists’ past or a bad influence brought to the venue by crowds. Although the phrases “rock ‘n’ roll circus” and “rock ‘n’ roll zoo” are used more than once, the unspoken message is, “I am one of the grown-ups.”

The feeling that the intended audience for this book is fellow professionals rather than starry-eyed fans or gossip hounds extends to the clinical distance with which Rodgers treats the rap phenomenon: Augustine got in on the ground floor of rap’s conquest of the American musical scene, accompanying Run-DMC and the Beastie Boys on their first US and international tours. However, while Augustine is African-American, his middle-class upbringing didn’t include the street experiences that shaped his first clients, and in addition to explaining African-American culture in the nerdiest way possible (“Artists on the Dope Jam tour participated in the daily game of ‘dozens,’ the verbal art of put-downs and a common practice with many of today’s urban youth,” reads a typical passage), Rodgers takes pains to let his (presumably white) readers know that rappers are really just regular guys and the reports of violence that trailed Run-DMC’s early concerts were completely exaggerated and misinterpreted. (It is interesting to see the lengths Rush Productions went to reassure skittish promoters that security would be tight, including press releases and news reports from the time: Rodgers’ use of multiple sources to provide context to Augustine’s story is a strong point of the book.)

Nevertheless, it’s with an almost audible sigh of relief that Augustine moved from protecting rappers to accompanying the relatively staid arena rock giants of the ’90s. Tensions ran high as Augustine tried to provide security for N.W.A., whose hit song “Fuck Tha Police” made it difficult, if not downright impossible, for him to coordinate his efforts with local law enforcement. The last straw was a threatening message left on manager Jerry Heller’s answering machine around the time Ice Cube left the group. Augustine doesn’t relay the message or name the person who left it, but it’s strongly implied that it was Death Row Records’ notorious founder, Suge Knight (darn it, that’s your problem, Andre: you’re just too dedicated to guarding your employers’ secrets!).

The not-very-sensational facts of Augustine’s experiences are mostly short on the kind of sex-and-drugs stories one might expect from a Silly Show-Biz Book, but Guardian of the Gods does provide copious detail about the procedures and challenges of keeping a touring band safe and on track, as well as portraits of many of the stars Augustine worked with. Augustine stresses that it’s hard for rock stars to have close friends: “It’s almost impossible to have a rock star you work for be your friend. . . . You are never really his peer,” he says, and adds that ego and isolation make it difficult for successful artists to befriend each other. Some of his work included making introductions between stars who were publicly feuding (or were perceived to be), a back-channel process as delicate as establishing diplomatic relations between rival governments. “Their egos won’t allow [friendships]. . . . But they would ask me, ‘What are the Aerosmith guys like?’ or ‘Are the Kiss guys fun to hang out with? What do they like to do?’ Privately, I think they are very curious about each other.”

Still, the long weeks and months of close contact with the artists on their tours and accompanying them as a personal bodyguard meant seeing them in private moments and just hanging out, and Augustine was close enough with many of them that he named his son after Run-DMC’s Jam Master Jay and mourned N.W.A.’s Eric “Eazy-E” Wright when he succumbed to AIDS. Friends or not, it’s clear that Augustine’s people skills are as important to his work as his organizing abilities and imposing physique.

In many ways, the stars’ personalities are about what you’d expect from their public personas: George Thorogood liked to spend his free time watching baseball and having a quiet drink in the bar; Jon Bon Jovi and Aerosmith’s Joe Perry spent a lot of time exercising; Kiss guitarist Ace Frehley took five suitcases of computer equipment with him on the Alive tour, possibly to distract himself from the drug and alcohol addictions that still haunted him.

Scouring concert venues for groupies is alluded to but mostly glossed over; although Augustine mentions that he always carried condoms when accompanying Gene Simmons, he says the practice of moving pretty girls to the front row has been overstated, and that finding high-energy fans was the first priority when offering ticket swaps. By the mid-’90s, many of the artists Augustine accompanied were family men, traveling with their wives. (Amusingly, the audiences for the single young rap artists he started off with were often dominated by teenage boys. “Where are the women at?” he says the rappers would ask.) What’s left are quirky but tame tidbits like Run-DMC’s penchant for wearing brand-new underwear and socks, fresh from the package every day, or an anecdote about Bon Jovi drummer Tico Torres’ insistence on shopping for antiques in Bogotá, Colombia, even in the face of kidnapping threats (nothing dangerous occurred).

Some of the funnier parts of the book involve Aerosmith lead singer Steven Tyler, who, if Guardians of the Gods is to be believed, may actually be the Joker when not performing: one time backstage, Tyler stormed into his dressing room. Concerned, Augustine followed and asked him if something was wrong.

Steven looked up and his eyes flashed wildly at Andre. “Yeah. As a matter of fact, there is something.” He stood up, turned his back to Andre and started rifling through his gig bag. Andre, rethinking his decision to enter Steven’s dressing room, suddenly felt like disappearing. Steven continued, “There’s something about you that has really been pissing me off lately, that I don’t like. I don’t like it at all.” Andre felt the blood drain from his face. “You don’t smile enough, man!” Steven turned his hand to reveal a gag set of chattering teeth. “Smile, man!”

Although the members of the band like each other, “Steven always has a private dressing room because the rest of Aerosmith prefers not to be in the same room with him prior to curtain.” He’s just too hyperactive: “Steven is supercharged and outgoing. He is constantly trying to make you laugh, messing with your ears and tickling you. Steven is a fun person, but he’s just out there.”

Imagining the soft-spoken “gentle giant” security guard and the flighty, flamboyant lead singer together suggests that any Hollywood producer interested in developing an odd-couple buddy comedy set in the world of rock ‘n’ roll should consider optioning Guardian of the Gods. They wouldn’t even have to cut anything to get a PG-13 rating.