When I got my first Atari VCS (as I knew it back in the day, but now universally known as the 2600), it promised the incredible: an arcade in my own home!  It didn’t take long to learn that it wasn’t quite what I imagined, but it was still the source of many hours of entertainment.  I didn’t get much of a chance to play games on competing systems at the time, though.  I recently found a copy of the retro video game anthology Intellivision Lives! for Gamecube. I already have the Activision Anthology for Gameboy Advance, collecting all the games that company produced for the Atari, and several collections of Atari games and various classic arcade games ported to current systems.  I’ll admit I’m a sucker for this kind of collection, not least for the nostalgia factor in being able to play these old games on modern equipment.  Often it doesn’t take long to scratch that itch, and I remember why I was happy to move beyond the blocky Atari graphics into PC games, and why the Nintendo Entertainment System was such a revelation when it was released a few years later.  And sometimes the classics aren’t as much fun as I remember, or I’ve been spoiled by newer games that don’t have the drawbacks I had no choice but to put up with in the old days. 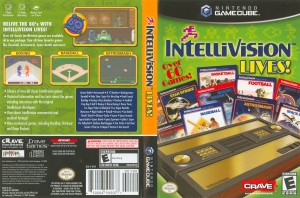 But!  There are few greater pleasures than revisiting something you had thought long gone, only to find that it is as good as—or even better than—you remember.  For me this is especially true of those action-arcade favorites that made up for lo-res graphics and repetitive gameplay with elegant simplicity, combined with expertly ramped up challenges.  Asteroids and River Raid are just fun, and while I don’t spend hours in front of the screen trying to “roll over” the score until my thumb is sore from hitting the fire button any more, playing these old games does take me back, at least for a while.

Intellivision Lives! is a little different, though: I had played plenty of Atari games and classic arcade games as a kid, but I never owned an Intellivision or knew anyone that had one. So the nostalgic impulse was more for an era than for a specific game, and it was an opportunity to fill in some gaps in my knowledge.  Also, the game was cheap.  I had been aware of Intellivision, of course: the Intellivision ad campaign, starring George Plimpton and featuring side by side comparisons of Atari and Intellivision games, was ubiquitous in the early ‘80s.  (Was there ever a more withering putdown of Atari’s disappointing Pac-Man adaptation than Plimpton drily commenting, “Blinky, you look pale”?)  That snooty ad campaign, and Intellivision’s home computer-like number-pad controllers, made it clear that Intellivision (short for “intelligent television”) was serious: they were the thinking man’s video game company, at least to hear them tell it.

The closest I got to an Intellivision in the ‘80s was during the brief period in which my local mall’s record store decided to branch into selling game consoles and had floor models set up to play.  If you weren’t a video game-hungry kid at that time, it might be hard to imagine how packed the store would be.  In those days you either fed quarters into an arcade machine or angled to get a home console of your own; there was little in between.  So I don’t think I got any closer than watching somebody else walk a Smurf around on the Colecovision (yes, one of Coleco’s exclusive properties was a game about the Smurfs; no, I don’t know if it was any good), and do . . . something . . . on an Intellivision.  It’s not just that my memory of events 30+ years ago is foggy, it’s also that it wasn’t always clear what was happening on screen when you watched someone else play a game in those days.  Sometimes it wasn’t clear even if you were the one playing!

To tell the truth, some of that head-scratching abstraction that was a hallmark of early console games came back to me playing Intellivision Lives!  Because of programming limitations, it was common for the instruction manual to do a lot of heavy lifting, explaining the premise, goals of the game, and even inspiring the player’s imagination with artwork that might have little in common with the virtual Lego bricks that appeared on the TV screen.  Luckily, modern game machines have plenty of memory, so these retro anthology discs can be padded out with on-screen instructions, snazzy menus (Intellivision Lives! features a virtual pizza parlor the player can “walk” around in, stopping at different arcade machines to select the games), and bonus materials like box art and video clips.  Still, the experience can be anything but intuitive: for starters, the complex Intellivision controls had been mapped onto the equally complex but different Gamecube controller, so games like Vectron were impenetrable, even with the instructions, and more ambitious simulators like Utopia (which, from what I can tell, really does deliver on the promise of an experience with the depth of a PC text game) I couldn’t even get to start properly.  Maybe when I have more time to study it.

Still, I did find some fun games that were obvious enough, like Astrosmash, a pleasantly chaotic mix of Asteroids and Space Invaders with space rocks and bombs falling with increasing speed on a ship at the bottom of the screen that tries to shoot them before they land.  There was also Thunder Castle, a truly impressive sword-and-sorcery-themed maze game that is unmistakeably a product of its time, but artfully so: with its beautiful pixelated graphics and chiptune rendition of themes from Schubert’s “Unfinished” Symphony, and its continually changing, non-scrolling screen, Thunder Castle resembles the PC and Apple games of the time like Lode Runner or Conan more than either the late period of the Atari 2600 or the early days of the NES.  Considering it came out very late in the Intellivision’s product cycle (after parent company Mattel had decided to cut Intellivision loose, in fact: it was published independently), it’s not surprising that it didn’t have a big impact on the “console wars,” but it’s a game that’s worth rediscovering (and from what I can tell it has found new life in recent years as a downloadable PS3 and iPad title).  I will definitely be spending some more time with Thunder Castle. 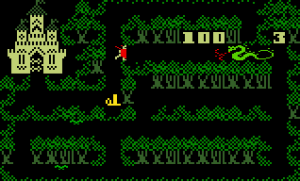 BONUS VIDEO: I found this while searching for the “Blinky, you look pale” commercial.  I guess Intellivision wanted its own version of the famous “Mean” Joe Green Coke commercial, but it does take the 1980s “soft sell” approach to a comical extreme.  Yes, that’s Henry Thomas of E. T. fame.