At Sai Pana, a trading post in an unspecified part of Africa, an expedition led by Professor Davidson is preparing to enter the jungle in search of the lost city of Zoloz, with the help of a map made of six pieces of ivory that fit together like a puzzle. Only the central seventh piece, which shows the exact location of Zoloz, is missing. Among those traveling with the Professor are his niece Diana Palmer and Geoffrey Prescott, a colleague from Melville University.

Sai Pana’s resident physician, Dr. Bremmer, shows interest in Davidson’s search, but for his own reasons: Bremmer is actually the head of a ring of saboteurs who are building a secret air base in Zoloz, and he will use any connivance to throw Davidson off the scent so he can keep his activities hidden. At the same time, Singapore Smith, owner of the Trade Winds hotel in Sai Pana, schemes to get his hands on the Professor’s ivory keys (and the treasure it leads to) himself. 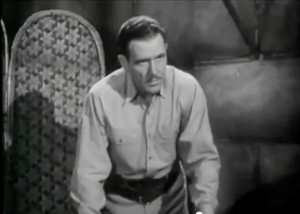 Meanwhile, deep in the jungle at Tonga village, the mysterious figure known as the Phantom has summoned the chiefs of the area tribes for a gathering. The Phantom, through his appearance of immortality and supernatural powers, has kept the peace between the tribes for centuries, but a thug named Long, disguised as a native, strikes the Phantom with a poison dart (an attack instigated by Bremmer, because he needs to be able to control the natives to get his airfield built). The Phantom’s assistant, Suba, ends the ceremony with a puff of smoke, but the damage is already done: the Phantom will die. The only hope for peace between the tribes is to find his son to take his place, as the Phantom identity has been passed down from father to son for generations. In this way, the Phantom is “the man who never dies.” 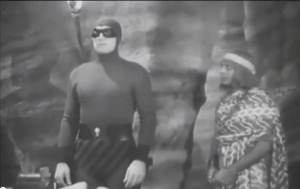 The Phantom’s son? Geoffrey Prescott, currently in Sai Pana with Professor Davidson’s expedition! After tracking him down with the aid of trapper Rusty Fenton, Suba brings Prescott to his father, who lives just long enough to pass on the mantle of the Phantom. Now it’s up to the new Phantom to protect Davidson, unravel the mystery of the saboteurs, and keep the peace in the jungle, in the 1943 Columbia serial The Phantom!

Although never as high profile as Batman or Tarzan, the Phantom has elements in common with both characters and has a long history as the star of a comic strip created by Lee Falk in 1936 (and still running in newspapers with the creative team of Tony DePaul, Mike Manley, and Terry Beatty). According to the strip’s mythology, the first Phantom was shipwrecked by pirates on the African coast in the 16th century. He was adopted by a peaceful tribe who both set him on his mission of fighting evil and taught him the many combat disciplines and sleight-of-hand tricks he uses to further that goal. The 1943 serial doesn’t go into that in any detail beyond the handing down of the Phantom’s identity; serials in general were much less concerned with origin stories than superhero movies in recent decades (the 1996 feature film starring Billy Zane makes for an instructive contrast), but unlike many serials The Phantom is reasonably faithful to the comics (and it’s a damn sight better than the Batman serial that immediately preceded it!).

The first chapter is entitled “The Sign of the Skull,” and indeed the skull is an important part of the Phantom’s iconography, particularly the carved ring he wears which leaves the imprint of a skull on those on whom he metes justice. Instead of the remote and forbidding Skull Cave, however, the Phantom of the serial keeps his throne in public, in the center of Tonga village, where he ceremoniously makes appearances to speak to the natives and pass judgment on lawbreakers. There’s quite a bit of flair to these proceedings, as Suba uses flash powder to create bursts of flame and smoke, making it look as if the Phantom appears and disappears by magic. (Interestingly, Bremmer manages to use that same sense of theatricality against the Phantom, first setting up a fraudulent “Fire Princess” whose supposed control of flame makes her a challenger to the Phantom’s authority in the jungle, and later putting a Phantom costume on one of his henchmen after thinking he had eliminated the real one, in order to control the natives.)

The Phantom plays on the superstitions of the natives one-on-one, as well: confronting the rebellious chief Chota, the Phantom “summons the spirit of fire” to burn Chota’s village unless he tells the truth. In another episode, he smokes out a murderer by pretending to put poison into glasses of wine, saying it will only harm the guilty; of course, the killer is betrayed by his own fear rather than by the wine, which is harmless. Like many pulp heroes, the Phantom wins by his wits and his powers of psychology and detection as much as by his fists and weapons. (And like those heroes, there’s a certain unapologetic ruthlessness to his methods.) 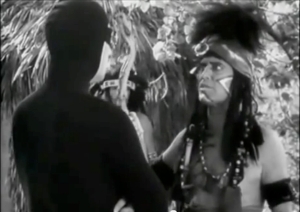 There are certainly enough villains to choose from: right off the bat, Professor Davidson is victimized by both Dr. Bremmer and his saboteurs and the competing forces of Singapore Smith (the “outlaws”). There’s quite a bit of jockeying by both groups as they each try to steal the ivory keys from Davidson, and at times they work together against their common enemy. Given that both groups are white men with stubble wearing khakis and pith helmets, it’s easy to get them mixed up. However, Singapore Smith is so obviously shady that he doesn’t make it to the end of the serial; even in death he causes trouble for the Phantom, who pays him a visit (in disguise as “Mr. Walker”) and is then blamed for Smith’s murder. Meanwhile, Dr. Bremmer, like most classic serial villains, works his evil through proxies (including traitors within the expedition), avoiding suspicion until the final chapter.

In a late part of the story, the Phantom and Davidson’s expedition run afoul of the Tartar, the strict ruler of a kingdom that resembles Mongolia. The incongruity of a Mongol fortress in the middle of an African jungle, combined with the kingdom’s extreme isolationism (normally, all outsiders are put to death if they enter the Tartar’s kingdom, but naturally the Phantom wins him over), mark this episode as an example of the “lost world” genre embedded in the larger story. However, not even the Professor comments on its strangeness, and there is no explanation offered as to its presence and survival. (Also, it practically goes without saying that all the major characters speak English; there are a few scenes in which natives speak their own language and somebody has to translate, but not so many that it slows down the action.)

As the Phantom, Tom Tyler is nicely physical and has a commanding presence, and Jeanne Bates is adequate as the headstrong Diana Palmer, but the only antagonist to have much character is oily Singapore Smith (Joe Devlin). As Dr. Bremmer, Kenneth MacDonald has some good moments and is smooth enough to convincingly play both sides, but didn’t leave a strong impression on me. Frank Shannon (Flash Gordon‘s Dr. Zarkov) plays Professor Davidson, but the decline in energy obvious in the later Flash Gordon serials is in evidence here as well. The Phantom’s animal companion Devil, a wolf in the comics, is played in the serial by a German Shepherd, Ace the Wonder Dog. 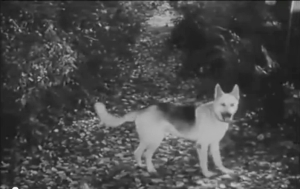 Beyond that, the casting of the many African tribesmen seems to have been mixed up with casting for a Western. Serials are not documentaries, of course, but the best of them make some effort to draw inspiration from the real world. In The Phantom, the natives resemble Hollywood Indians, (mostly) white actors with stilted accents and war paint. The Internet Movie Database lists among the uncredited actors playing natives Jay Silverheels (later TV’s Tonto) and Iron Eyes Cody, an Italian immigrant who adopted an Indian identity and made a specialty of playing Indian characters. This knot of tangled ethnic representation is not terribly unusual for the time, but compared to the actual black actors I just saw in Tim Tyler’s Luck, it’s especially phony. 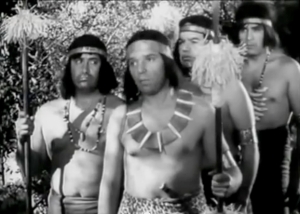 Where I Watched It: The whole thing can be watched on YouTube.

Best Chapter Title: “The Road to Zoloz” (Chapter Thirteen) is nicely specific, and also suggests an entirely different film starring Bob Hope and Bing Crosby. It’s worth pointing out that both of the Phantom’s catch phrases, “The Man Who Never Dies” and “The Ghost Who Walks” are used as chapter titles (Chapters Two and Five, respectively).

Best Cliffhanger: Despite my criticisms of the acting in The Phantom, at least the action is pretty good, and there are not only several good cliffhangers but some exciting action sequences within the chapters. A very well-done cliffhanger ends Chapter Five (“The Ghost Who Walks”), in which the Phantom fights with the saboteurs on a rope bridge overhanging a deep gorge. Earlier, the Phantom, stalking the saboteurs as they drove an oxcart full of contraband ammunition to the secret airfield, had cut partially through the bridge’s ropes to weaken them. When he ends up fighting the saboteurs directly, of course the fight spills onto the damaged bridge, and the ropes give way, (seemingly) dropping them into the river far below.

Sample Dialogue: In the first chapter, Long (Wade Crosby) returns to witness a gathering at the Tonga village after killing the Phantom, along with fellow saboteur Andy (Sol Gorss) and upstart chief Chota (Stanley Price). To his chagrin, the new Phantom is accepted without question by the natives. 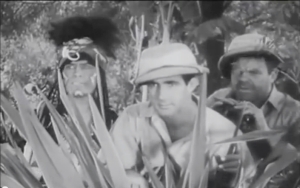 What Others Have Said: “Occasionally there was a shock when a player you had always associated as a good guy turned up in a serial as a crook. . . . You just couldn’t believe that lovable old rascal was really one of the baddies. . . . But, the real test of credibility came when Ernie Adams, who portrayed not only bad guys, but sneaky, yellow, cowardly bad guys, was cast in the role of Rusty Fenton in The Phantom in 1943, and you had to believe that the hero would have in him a good, trusted ally.” –William C. Cline, “When the Leopard Changed Its Spots” in Serials-ly Speaking 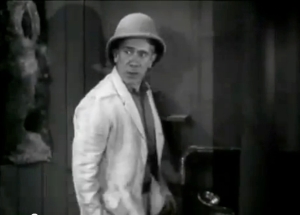 (Serials I’ve reviewed in which Adams appeared include The Miracle Rider, in which he played the shady store operator’s clerk, and Tim Tyler’s Luck: Adams played Becker, the henchman whose death by gorilla meant so little to Spider Webb.)

What’s Next: For my final installment of Summer 2016’s Fates Worse Than Death, I will return to the air with Flying G-Men. See you in two weeks!