Tom Morgan, Texas Ranger, has been a friend to the Ravenhead Indians since his father, also a Ranger, died protecting the Indians’ land from “reservation jumpers,” and has even been made an honorary chief of the tribe. But now the Ravenhead face a threat that has even Tom Morgan stumped: attacks by the legendary “Firebird” have some members of the tribe agitating to leave their land. Morgan doesn’t believe in native superstitions, but who could gain from forcing the Indians off their land? Could it be merchant Emil Janss, who depends on the Indians for trade but who is also hoping to sell a large parcel of land to the government for use as a new reservation? Is it Longboat, a disgruntled member of the Ravenhead who hopes to usurp the rightful chief? Or is it Zaroff, an oil baron who appears to have an unusual interest in the reservation land? These questions and more are answered in The Miracle Rider, starring beloved Western icon Tom Mix!

Actually, it doesn’t take long for the audience to find out that it is Zaroff (Charles Middleton, Flash Gordon‘s Ming) behind the attacks; posing as an oil man, Zaroff is secretly mining “X-94” on Indian lands, an incredibly powerful explosive which he plans to sell to an unnamed foreign power. In addition to refining and finding applications for X-94 (which later include a super-fuel), Zaroff’s chief scientist Metzger (Niles Welch) has created the high-tech gadgets that have the Ravenhead convinced that they are under attack. An Archimedes’ mirror-like heat ray causes fires to “spontaneously” ignite on the reservation, and a remote-controlled rocket glider with a whining electric siren is the Firebird itself.

The Miracle Rider was Mascot’s follow-up to The Phantom Empire, and because of its infusion of the modern Western with up-to-the-minute scientific speculation, Jim Harmon and Donald F. Glut considered it as part of the “zap-gun Western” fad in their book The Great Movie Serials. However, as I argued in a recent look at science fiction Westerns, The Miracle Rider isn’t nearly as fantastical as The Phantom Empire. Although there is some novelty in seeing Tom Mix in his giant cowboy hat ride the bat-winged rocket glider, Zaroff and his weaponsmith Metzger are not very different from the criminal masterminds and spies that other serial, pulp, and comic book heroes were facing in the mid-1930s.

Most of the super-scientific inventions the writers of these stories came up with were just refinements of existing technologies (communication and remote control by radio; ever-more powerful explosives) or inventions that were widely regarded as just around the corner (television). Plot-wise, X-94 is less important as a scientific discovery than as the MacGuffin that motivates the plot: in the inter-war years, as in the Cold War, espionage often took the place of actual combat, so a new invention or discovery in danger of being stolen by the enemy was a reliable story starter. Finally, the rocket glider, which is genuinely eerie, crashes in only the second chapter, snuffing out any potential for airborne thrills. 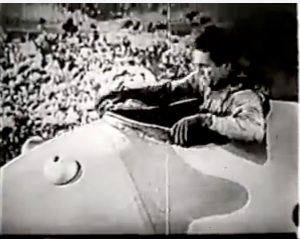 Modern viewers will also recognize quite a bit of Scooby-Doo in the basic plot, with one meddling Texas Ranger the only thing standing between Zaroff and his goal to be “the most powerful man in the world” (as he says out loud several times). At first, Zaroff throws suspicion on Janss, the merchant (Edward Hearn), but when Janss figures out what’s going on he demands to be cut into the deal. Longboat (Bob Kortman), the treacherous Ravenhead, is also under Zaroff’s thumb: in addition to his desire to be chief, Longboat is secretly a “half-breed,” making him vulnerable to Zaroff’s blackmail. With the addition of Zaroff’s gang of interchangeable henchmen and his right-hand man Carlton (Jason Robards, Sr.), that makes for quite a few villains Tom Morgan must get through before he can accuse and apprehend Zaroff.

The Miracle Rider begins unusually, with a fifteen-minute prologue dramatizing the shrinking of the Indians’ land in the face of white incursion. (I suspect this prologue was cut off in at least some markets; I’ve seen versions of The Miracle Rider that omit it, and it adds only background information not vital to the plot.) From 1777 up to Custer’s Last Stand, the struggle for land is dramatized as a series of historical figures including Daniel Boone, Davy Crockett, and Buffalo Bill Cody stand up to white poachers and claim jumpers to whom government agreements with Indians mean nothing. The invaders say things like “The sooner we kill off the Indians, the better it’ll be for all of us!” and “The Indian thinks he can keep land once the white man wants it!” Despite the efforts of the “friends of the Indian,” history is not on their side, as an animated map shows the spread of white settlement, with Indian territory squeezed into ever smaller spaces. By the time the U.S. government is shown granting the Ravenhead tribe a reservation twenty miles long “for all time,” it’s both pathetic and obvious that this will be just the latest in a long string of broken promises, but the filmmakers evidently intend it to be taken in earnest. 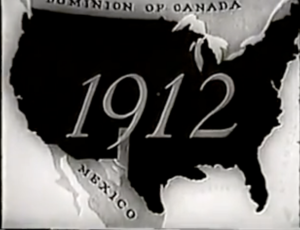 There’s much in The Miracle Rider that modern viewers could take issue with: most (though not all) of the Indians are played by white actors, and the Ravenhead are dependent on their “white brother” (or even “white chief”) Tom to protect them from those who would exploit them. But The Miracle Rider is surprisingly frank about the injustices suffered historically by Native Americans without making unrealistic saints out of them. Early on, the Ravenhead chief Black Wing (Bob Frazer) is killed by one of Zaroff’s men, leaving an opening for the corrupt Longboat to argue that the reservation land is cursed and they should migrate elsewhere. Black Wing’s daughter Ruth (Joan Gale) pleads with Tom to convince the tribe to stay; as the son of a Ranger who gave his life for the Ravenhead, Tom grew up among them and knows their ways (there’s that “best of both worlds” trope again). There’s no question that he would do what he can to help, but unlike more modern depictions that feature a corrupt or unreliable government, Tom is backed up by a solid and dependable Indian Agent, Adams (Edward Earle). Despite the presence of bad men like Zaroff, the forces of law and order haven’t given up; The Miracle Rider doesn’t claim that history could have been any different, but it does suggest that it’s at least possible to treat people, Indian or otherwise, with dignity and fair play. 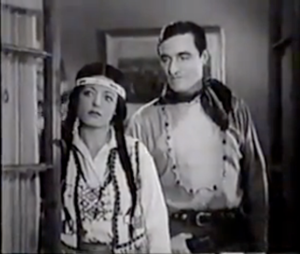 As for leading man Tom Mix, The Miracle Rider was both a beginning and an ending: Mix had made dozens of films (mostly Westerns, in many of which he played characters named Tom) and had been a huge star in the late teens and 1920s, famous for his flashy Western costumes and ten-gallon hat and his “million-dollar smile;” one of the first multi-media stars, Mix was at home in the circus performing Wild West routines and would later have a successful radio show. But Mix’s films in the ’20s had been silent, and the talkies he made in the ’30s were seen as something of a comeback, to varied success. Mix was in his fifties when The Miracle Rider was made, and while he still rides and shoots like a pro, he’s no longer the youthful romantic hero of his earlier films: at the end, after he’s been promoted to Director of Indian Affairs, he asks Ruth to come to Washington with him . . . as his secretary. “And here’s the contract,” he says: it’s a handshake. The Miracle Rider would turn out to be his last major film and his only sound serial.

Despite some draggy sections (it’s gotten to the point where I inwardly groan when I see that a serial has 15 chapters), The Miracle Rider is the work of a man still innovating. In the very last chapter, Tom Morgan is held at gunpoint by Zaroff and two of his henchmen; when asked if he has a last request, Morgan asks to make a cigarette. After he takes too long, Zaroff impatiently bats the rolling papers away, sneering, “An old trick, Morgan! Trying to blow tobacco in our eyes, so we couldn’t see, eh?” At that moment, Tom’s horse (Tony Jr.) sticks his head in a car parked outside and honks the horn, distracting Zaroff and his men long enough for Tom to turn the tables. “That’s another old trick, Zaroff,” he says, “but you’ve got to have a good horse to do it.”

Where I watched it: I watched the whole thing on YouTube, which is why I haven’t included very many screen shots. My apologies; you can pretend it’s a radio program if you like.

Best cliffhanger: At the end of Chapter 2 (“The Firebird Strikes”), Tom Morgan has infiltrated the Indian Cave hideout in which the “Firebird” rocket glider is stored; during a fight with Zaroff’s men, he climbs inside it and is stuck inside when it takes off. The chapter ends with the glider, remote-controlled by Zaroff, crashing to the ground in a fiery explosion. (Needless to say, Tom survives, in this case by parachuting out before the crash.)

Annie Wilkes Award for Blatant Cheat: In my discussion of Undersea Kingdom, I noted that Republic seemed to cheat its cliffhanger resolutions more frequently than other studios, but I think that habit began at Mascot, the studio that later became Republic. The resolution of the cliffhanger that ends chapter 6 (“Thundering Hoofs”) isn’t quite as mind-bending as the Annie Wilkes Award winner for Fighting with Kit Carson, but it plays pretty fast and loose, as do some others in this serial. In this one, Tom is riding with his captive, Sewell, tied up behind him, chased by one of Zaroff’s men on a motorcycle. Passing under a tree branch, Sewell reaches up and catches it with the ropes that bind him, hanging himself in the tree and pulling Tom to the ground, where he is in imminent danger of being trampled by horses. However, as the scene is reset at the beginning of chapter 7 (“The Dragnet”), the gang on horseback is distracted by Sewell hanging from the tree and simply stops riding. They don’t come anywhere near Tom, who is able to pick himself up with no problems. I can hear Annie Wilkes screaming about this one from here.

Sample dialogue: “Today the Ravenhead tasted the tongue of the Firebird–tonight they’ll fell its claws!” –Zaroff, Chapter 1 (“The Vanishing Indian”)

What others have said: “The present writers lack the psychic insight of some reviewers to know whether Tom Mix was bored with the serial or not, but certainly, what appears on the screen in private showings is a quiet professionalism. Tom Mix had ridden these familiar trails many times before, but nobody knew how to ride them better.” –Harmon and Glut, The Great Movie Serials 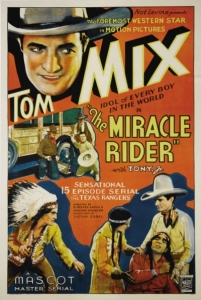 What’s next: The Green Archer