A mysterious plague is sweeping the Earth: known as the “Purple Death” because of the single purple spot it leaves on the skin of its victims, the disease is responsible for the deaths of thousands, and authorities are helpless to stop mounting panic. Professor Gordon is one of the scientists struggling to find a cure, and it is his son Flash (already a hero for saving the earth several times over) who, with Dr. Zarkov and Dale Arden, discovers the culprit. A ship from Mongo is spotted high in the atmosphere, dropping the malign dust that causes the Purple Death. 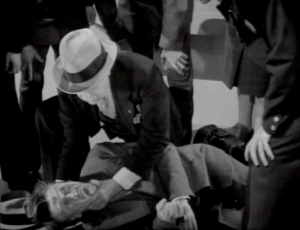 Starting for the planet Mongo at once in Zarkov’s rocket ship, the trio face aerial combat with the invading ship and, feigning a crash, descend to Arboria, the home of Flash’s ally Prince Barin. Barin confirms that Emperor Ming yet lives and is undoubtedly behind the attacks on Earth, and a council of leaders who are opposed to the merciless dictator soon convenes at Barin’s palace.

The only antidote for the Death Dust is the element “polarite,” which can be found in the far Northern reaches of Frigia, represented by Queen Fria. The expedition to the icy realm is bulked out with footage from an earlier polar exploration film, White Hell of Pitz Palu; footage of downhill skiers appears in the montage that opens each chapter, leading me to expect a snowbound assault on Ming à la The Spy Who Loved Me or Inception, but it never happens. (Also, it wasn’t until I was selecting screen caps that I noticed Flash and Dale in their cold-weather gear bear a strong resemblance to Santa and Mrs. Claus.)

Although the threat of the Purple Death doesn’t take twelve chapters to resolve, it’s the inciting incident that kicks off the latest round of strikes and counter-strikes in Flash Gordon Conquers the Universe, the third and final serial in Universal’s epic adaptation of Alex Raymond’s popular comic strip. 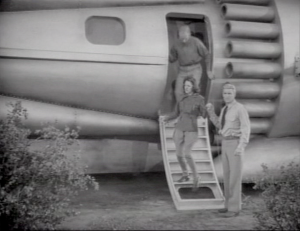 Despite, or perhaps because of, its references to the events and characters of the 1936 and ’38 serials, Conquers the Universe shows just how much time has passed since the success of the first Flash Gordon. Many aspects of the production, impressive in ’36, would have seemed crude just four years later, especially with Republic’s slick, streamlined adventure serials entering the market in the mean time. The static recap cards from the earlier serials have been replaced by scrolling titles; this now-familiar format had been used in Buck Rogers (also starring Flash Gordon lead Buster Crabbe) and would appear in other serials of the 1940s (and of course was the inspiration for the similar opening crawl in the Star Wars films). 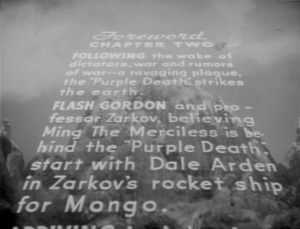 The pacing is rapid throughout, with clear but often functional dialogue that serves the plot; Flash Gordon was never about deep characterization or philosophy, but Conquers the Universe is especially plot-heavy. And while many effects look quaint to modern eyes (Mongo’s giant iguanas make an appearance, and electrical effects are frequently accomplished with zig-zag lightning bolts scratched directly onto the film), just as many impress with how effective simple devices can be, and there are enough new settings and perils that the serial doesn’t feel like a retread.

Of particular note are an assault by exploding robots (Chapter Three, “Walking Bombs”), given an uncanny mechanical gait through the magic of undercranking, and the tribe of “Rock Men” who dwell in Arboria’s “no man’s land.” (Unlike the Clay People of Flash Gordon’s Trip to Mars, the Rock Men only dress as rocks to camouflage themselves from the giant lizards.) The Rock Men speak backwards, and once Dr. Zarkov realizes that their language is the same as that of a “lost tribe” that once inhabited Earth’s Gobi Desert, he is able to communicate with them; after Flash saves the Rock King’s son from a disaster, they aid the Earthlings in their fight against Ming.

Speaking of Barin and Aura, the happy couple looks quite different from their earlier incarnations. As Barin, Drew cuts a more dashing figure than Richard Alexander: with his trim mustache and forest costume, he strongly resembles Errol Flynn as Robin Hood. As for Aura, the changes to her personality outweigh those to her appearance: instead of the scheming, morally flexible antiheroine of the 1936 serial, she is here entirely settled and content in her life in Arboria, and her reaction to being pulled back into her father’s evil machinations is passive terror and indignation. Marriage has domesticated her. 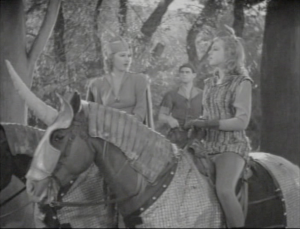 Fortunately (or not, depending on your perspective), the lack of Aura’s feminine wiliness is made up for by the introduction of Lady Sonja (Anne Gwynne), an Arborian lady-in-waiting secretly loyal to Ming. Once Sonja lures Aura to Arboria’s Red Forest to be abducted by Ming’s forces (for even he would not bomb Arboria without first making sure his daughter was safe), the treacherous lady becomes half of a villainous double act with Captain Torch (Don Rowan). Together, Torch and Sonja, along with Lieutenant Thong (tee hee), shadow Flash Gordon & co. and bedevil them in a variety of ways, carrying out missions for Ming.

Sonja doesn’t have the depth of Aura–she’s purely spiteful and untrustworthy, without even the motivation of misplaced love–but it’s worth noting the number of female characters in the Flash Gordon serials and the range of their motivations. Aside from Dale, Aura, and Sonja, there’s Queen Fria of Frigia (an uncredited Luli Deste), who expresses a hope that Flash Gordon might be convinced to lead Frigia’s armed forces, teasing a source of tension with Dale (this comes to nothing, although it may be more fleshed out in the comic strips that are the basis of the story).

In fact, Flash Gordon does a better job of female representation than the original Star Wars trilogy that it inspired: in Conquers the Universe, Dale is revealed to be an expert chemist and radio operator, a detail I don’t recall being mentioned before, but which gives her more to do than simply be kidnapped. It’s true that at least some of the women on-screen are purely eye candy, and there’s less of the emphasis on Buster Crabbe’s physique that made the 1936 serial an equal-opportunity source of titillation (like the Tarzan series, Flash Gordon in all its iterations has celebrated the body beautiful). Still, compared to the many serials I’ve watched that have only a single token woman, it’s refreshing that the population of the fantasy world of planet Mongo at least contains individuals of both sexes. 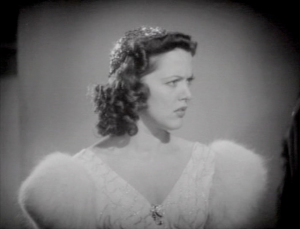 Ultimately, Ming’s greatest weakness is the number of people in his service–guards, scientists, soldiers–who are willing to turn against him. The political subtext is no more complex or subtle than before–dictators are bad–but the story emphasizes that those who take power by force and cruelty will never have the loyalty of those they conquer. Rather, they will only breed a thirst for revenge in their underlings. As always, Flash Gordon inspires trust and confidence in those he meets simply by doing the right thing.

And what about that title, anyway? Conquering isn’t really Flash’s bag. As silly as it sounds, Ming in his arrogance declares at one point, “I am the universe!” So, by the transitive property, when Flash inevitably conquers Ming . . . well, you get the idea.

But just in case you didn’t, Zarkov explains it.

What I Watched: Flash Gordon Conquers the Universe (Universal, 1940)

Where I Watched It: A two-disc DVD set from Timeless Media Group 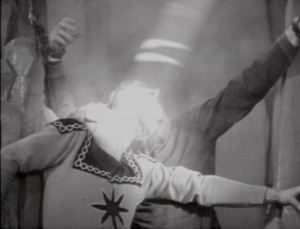 Best Cliffhanger: Another plot thread that continues from the earlier serials is Ming’s desire to have Zarkov’s scientific genius at his command. So, in Chapter Four (“The Destroyer Ray”), when Ming has Zarkov captive and the Earth scientist refuses to serve him, Ming orders his execution. A death ray slowly moves toward the chained scientist, and when Flash shows up to rescue him, he appears to be caught in it, too. What really elevates this is that Ming, surrounded by his retinue, has forced Dale (also captive) to watch the scene unfold. She begs Ming to spare them, beating on his chest with her fists, and then covers her face, unable to watch, while Ming cackles at his victims’ helplessness. “He has chosen his own death!” he sneers. This is what we watch serials for.

A Note on Costumes: Although there’s still a great deal of space opera exoticism, including long looks at the harem-like entertainments Ming has at his disposal, the costumes and sets display fewer of the ancient or near-Eastern motifs that were prominent in the earlier serials. Barin’s palace resembles a traditional European castle, with parapets and everything, and most of the male characters dress in military uniforms with braids and epaulets; except for the ray guns and space ships, Arboria might as well be Ruritania, an imagined Mitteleuropa in outer space. 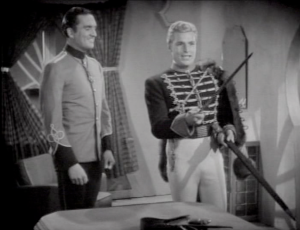 Even Ming gets in on the act, assuming a high-plumed dress uniform, “now more a wicked general than Satan” in the words of Jim Harmon and Donald F. Glut. One could assume that proximity to Earth has affected Ming’s tastes: although most of Ming’s pleasures are accompanied by stereotypical “Oriental” music, the soundtrack is a distinctly modern rhumba in Chapter Four, leading me to imagine Xavier Cugat and his orchestra chained to a bandstand and forced to play just off-camera. You’re a peacock, Ming. Strut, Ming, strut.

What Others Have Said: “Earth heroes have journeyed to other worlds by Crystal Door and spaceship. Our own planet has been invaded many times by alien menaces bent on dominating the Earthlings. In all these instances there have been mighty conflicts between good and evil. But after the holocaust of ray zapping and atomic blasting had settled, the audiences huddled in the safety of terran movie houses admitted one important fact: There was only one alien tyrant capable of conquering the universe, Ming the Merciless. And there was but a single hero able to defeat him–Flash Gordon.” –Jim Harmon and Donald F. Glut, The Great Movie Serials

That brings this summer’s serial coverage to an end. I’ll probably still have a few serial-related articles coming up, and Medleyana will continue to update on other topics, but that’s it for regular entries until next summer. Until then, thanks for reading along, and thanks for all the comments and support!