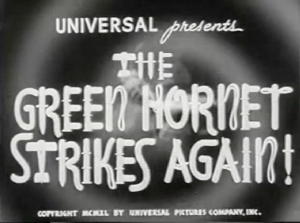 Sentinel publisher Britt Reid, taking a much-needed vacation in Hawaii, has left his newspaper in the hands of an editor named Harper. While Reid is gone, his secretary Leonore Case and reporters Axford and Lowery begin to suspect that Harper is connected with the criminal Syndicate running rampant in the city: Harper has killed stories about big crimes and even refuses to expose the racketeers when given information straight from the District Attorney. Harper is a member of the Syndicate, secretly run by a man named Crogan, and while Axford and Case send telegrams urging Reid to return from Hawaii, the Syndicate’s men on the island try to prevent him from doing so. First they try to discourage him indirectly, and when it’s clear that he’s heading back to the mainland they kidnap him and his valet Kato, tying them up in a fishing shack with the intention of feeding them to the sharks in the morning. 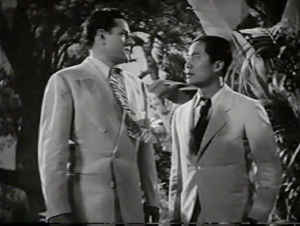 The Syndicate’s island force is headed by a man named Bordine, who already has a grudge against Reid for uncovering the truth about a past crime Bordine had pinned on an innocent man. When Reid and Kato escape the fishing shack (with a little help from Reid’s alter ego the Green Hornet) and make it to the departing ship, Bordine follows them in hopes of finishing them off. An unrelated fire that begins in the boiler room derails his scheme, however, and endangers everyone on board. And this is just in the first chapter of The Green Hornet Strikes Again! 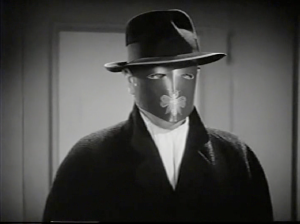 As should be clear from the summary of Chapter One, The Green Hornet Strikes Again has no shortage of twists and turns. In fact, it has one of the most convoluted plots of any serial I’ve watched yet: while in broad outline it follows a similar plot to The Green Hornet (from earlier in the same year), with its overarching Syndicate being broken apart by the Hornet one racket at a time until he can finally confront the big boss, it has more chapters, more characters, more settings, and, like most sequels, is generally overstuffed. (Of course, it was meant to be watched on a weekly basis rather than all at once, but I’m not sure how it would have been any easier to keep track of with a week elapsing between each chapter.) Having said that, there are many enjoyable scenes and chapters in this, and plenty of action in the serial tradition. 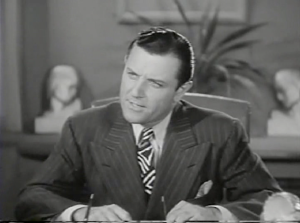 The Green Hornet Strikes Again features a different actor in the title role (Warren Hull, who unlike his predecessor Gordon Jones also provides the Hornet’s voice while in costume), but otherwise brings back the main cast of the earlier serial. Keye Luke plays Kato, Anne Nagel plays Leonore Case, and Wade Boteler plays Irish policeman-turned-reporter Michael Axford. Instead of Jenks, the ambitious young reporter is Lowery (Eddie Acuff), whose antagonistic partnership with Axford is the main source of comic relief. A few references are made to events from The Green Hornet, but the Syndicate in Strikes Again isn’t the same one that was defeated in the first serial. 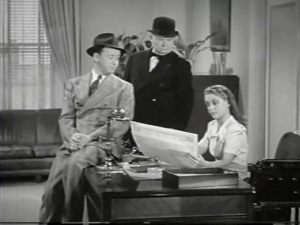 The Syndicate’s plots are also more ambitious than those of its predecessor: in addition to the attempt to take over the Sentinel, there’s a plot to replace the heiress to an aluminum fortune with an actress, allowing the Syndicate to control the aluminum company’s board of directors; an attempt to sabotage the source of the aluminum plant’s electricity when that scheme fails; a plot to develop a “magnetic bomb” in a secret laboratory in a steel plant; and even some that don’t involve metal or factories. This provides ample room for stock footage, often integrated smoothly through the use of rear projection: it really looks like Reid and Lowery are on the floor of the steel plant, and through quick editing they appear to be in real danger of having molten metal “accidentally” spilled on them. In other scenes, the Green Hornet is called on to commandeer speeding cars, trucks, or airplanes, and survives all kinds of crashes, explosions, and building collapses (including one caused by a bolt of lightning!). In almost all the crimes perpetrated by the Syndicate, there’s a theme of urgently-needed wartime materiel being diverted to foreign buyers, and again there’s no need to specify who they are, or why they are bad news. 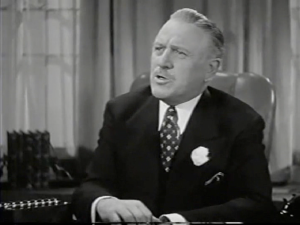 Kato, who is both Reid’s manservant and the Green Hornet’s faithful ally, doesn’t have as much to do in this serial, unfortunately: in The Green Hornet he got to karate chop a few bad guys, but in Strikes Again he mostly drives the car and pulls the Green Hornet out of the rubble after the aforementioned disasters. I wanted to mention him, however, because there’s a good case to be made for Kato as the most interesting character in the Green Hornet saga. According to the exposition at the beginning of The Green Hornet, Kato is loyal to Britt Reid for saving his life in his native Shanghai; although Kato’s subservience fits the “Oriental houseboy” trope, he has always been portrayed as intelligent and capable. In addition to his martial arts skill, he designed and built the Green Hornet’s gas gun and equipped their customized automobile, the Black Beauty. 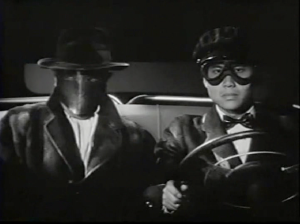 Kato has been well-represented in the movies as well: Keye Luke, who originated the role on film, first became prominent playing Charlie Chan’s “Number One Son,” Lee, and had a distinguished career as a character and voice actor in film and television, including a recurring role on Kung Fu. In the 1966 television series, Kato was played by up-and-coming martial arts icon Bruce Lee, who was so popular in his native Hong Kong that the series aired as The Kato Show there. In 1974, three episodes of the program were edited together into a theatrical Green Hornet film to take advantage of Lee’s growing fame. 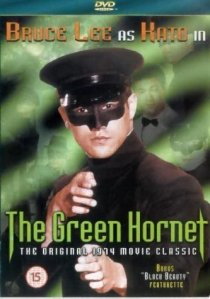 Finally, the comedic, Seth Rogen-starring 2011 Green Hornet feature leans heavily into the realization that Kato (played by Jay Chou) is the skilled one while Rogen’s Britt Reid is a clueless party animal who at first gets into the hero business for kicks and only gradually realizes his responsibility. Like Big Trouble in Little China and the 2013 Lone Ranger film, the 2011 Hornet delights in reversing the expected relationship between hero and sidekick, and the pair can only work together effectively when Reid is able to see Kato for what he has always been: a partner.

What I Watched: The Green Hornet Strikes Again (Universal, 1940)

Where I Watched It: A Pacific Entertainment DVD, which, since it was sourced from videotape, manages to look worse than The Green Hornet did when I watched it on YouTube.

Best Cliffhanger: In Chapter Twelve (“Crashing Barriers”), Michael Axford and Leonore Case have been taken hostage by the Syndicate and taken to a warehouse to be disposed of. Following in another car, the Green Hornet drives straight through the warehouse’s freight door–and right into a huge pile of explosives stacked inside, which detonate immediately! 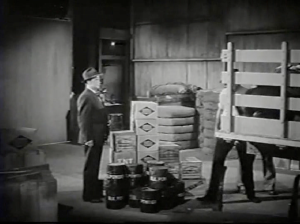 Annie Wilkes Award for Most Blatant Cheat: All but one of the cliffhangers in this serial feature Britt Reid in his role as the Green Hornet, but the end of Chapter One (“Flaming Havoc”) allows him to take heroic action as himself. When a fire breaks out on the ship heading back to the mainland, Reid rescues Gloria (a character whom I thought would continue to be important, but who turned out to be another member of the rotating cast, never to be seen again), carrying her through a blazing hallway to the open deck. The serial appears to be over before it’s even begun when a flaming rafter falls directly on top of them and the screen fills with the ever-growing fire. In my notes for the beginning of Chapter Two (“The Plunge of Peril”), I have simply jotted, “they make it,” indicative of how little danger these mishaps actually pose for our heroes. The boat still sinks, however. 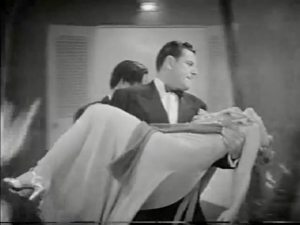 Favorite Character (Aside from Kato): Every once in a while a secondary character shows up and steals the movie for a chapter or two. Frenchy Ludoc in Gang Busters was one such character; Vultan in Flash Gordon was another. In Chapter Fourteen of The Green Hornet Strikes Again, it’s Foranti (Jay Michael), a racketeer illicitly placed in charge of the Builders’ Association by the Syndicate. While skimming off Association funds for his own use, Foranti is funneling money toward the construction of an expensive house, ultimately to belong to Crogan. When the Sentinel prints the truth about him, he shows up to intimidate Britt Reid in person. 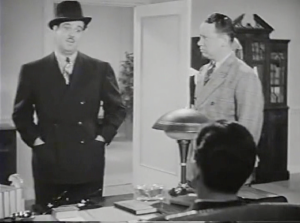 Although soft-spoken, every line he speaks sounds like it was written for Edward G. Robinson, see? He just figures Reid needs to be leaned on a little, see? And the squealer who fed the Sentinel the information about Foranti is dead now, see? You get the picture. Foranti isn’t exactly comic relief (that’s what we have Axford and Lowery for), but as a parody of the popular gangster, he veers farther into camp than the rest of the film; he’d be more at home in Columbia’s Batman serials. This chapter also makes good use of the conceit that the Green Hornet poses as a criminal to get information, and here he gets Foranti to turn on his associate Breedon by playing to his paranoid fear that Breedon is betraying him. On top of all that, Foranti has the distinction of being gassed twice in the same chapter by the Hornet, the only villain so treated.

Sample Dialogue: Crogan (Pierre Watkins), to his men (sarcastically): “Yes, that’s right, the Green Hornet: a lone wolf who plays your own game and makes monkeys out of all of you!” (Chapter Twelve, “Crashing Barriers”)

What’s Next: Join me next week for The Fighting Marines!