Thirty-Nine-O-Thirteen! The number strikes terror into the hearts of an innocent citizenry as Harry Crowel, escaped from the prison to which he was sentenced for unnamed crimes, orchestrates a campaign of bombings and sabotage, revenge against those who convicted him. First among his targets are business interests of his former partner, Horace Granville. When 39013 (the name taken from Crowel’s prisoner number) strikes the Granville Amusement Center by sabotaging the diving tank of the three-man Daredevils act, leading to the death of one Daredevil’s brother, the three men are motivated to lend their talents to the search for the criminal mastermind.

Leading the Daredevils is Gene, an acrobat and older brother of the victim; the other two members are Bert, an escape artist, and Tiny, a strongman. With their combined abilities, they make an able team of detectives, and their attention is divided between saving Granville’s holdings from destruction and protecting Granville’s granddaughter, Blanche. But what of old man Granville, so frail since his recent stroke that he must stay enclosed behind glass windows in a sealed room, communicating with police forces and the Daredevils by telephone? And who is the mysterious “Red Circle” who sends the Daredevils helpful tips by placing anonymous notes for them to find? Through twelve chapters of action, suspense, and varied locations, these mysteries and more are solved in Daredevils of the Red Circle!

First things first: it’s revealed right away in the first chapter that Crowel, alias 39013 (Charles Middleton, Flash Gordon‘s Ming and The Miracle Rider‘s Zaroff, among many other villainous roles), is impersonating Granville. The real Granville is being held captive in the basement of his house, the better for 39013 to torment him with the destruction of everything Granville worked his whole life to build. It’s easy to imagine a modern film making the reveal of 39013’s imposture a big third-act twist, but in Daredevils of the Red Circle it’s played for mounting tension–the audience knows “Granville” is a fraud, seeking to trap the Daredevils–and gives Middleton copious opportunities to gloat, to “monologue” to his prisoner. When in disguise, 39013 is played by the same actor as Granville (Miles Mander; he even says that he will only speak in Granville’s voice while in disguise, getting around any need for Middleton to dub lines), so these sessions are the meat of the role for Middleton. When the disguised ex-con confronts his old partner, the effect is achieved with a well-done split screen.

I was initially under the impression that Daredevils of the Red Circle was set at the circus, but that’s not quite true: the Granville Amusement Center is more like New York’s Coney Island or the amusement parks that were built along southern California’s piers, and that setting is left behind after the first chapter. The performing background of the Daredevils is important, though, and provides a connection to the superheroes who were just becoming popular in comic books (and would soon appear in their own movie serials). The skin-tight costumes most superheroes still wear derive from the leotards and bodysuits of circus performers, and in the Golden Age of comic book heroes, when the circus was a more prominent cultural influence, a number of heroes were said to have gotten their athleticism and unique skills from circus training (Batman’s sidekick Robin is the best-known example). The Daredevils even have a logo: the red circle on their costumes, later appropriated by the mysterious helper who draws it on notes to get the Daredevils’ attention.

In addition to their circus costumes (traded in for suits and fedoras after the first chapter), the Daredevils’ skills translate well to detective work, at least the kind of physical confrontations typical for serials. Gene (Charles Quigley) is the acrobat of the group, and although he performs a few stunts and displays some wicked judo-like moves during fight scenes, that mostly translates into him being faster than the others. Bert (David Sharpe) is an escape artist, bringing with him a set of skills and equipment (lock picks, files, etc.) that have proven handy for a diverse range of heroes that includes Batman, Sam Spade, and Houdini himself. (The great escapist is mentioned by name, and it’s worth noting that Houdini had been the star of several films and stories–including one ghost-written by H. P. Lovecraft–that positioned him as a real-life pulp hero.) And every team of heroes needs some muscle: Tiny (Herman Brix, who had played the lead in The New Adventures of Tarzan, and who would later change his name to Bruce Bennett) performs feats like lifting a car by its back end before it can drive away, battering down doors, and even punching through a wall to get to 39013, in addition to the numerous fights he gets into.

There are a few surprising twists that it would be better not to reveal, but Daredevils of the Red Circle deserves credit for giving depth to characters so obviously rooted in formula. As in many serials, Blanche (Carole Landis) is the only prominent female character, but there is more to her than is obvious at first. Also, I fully expected Gene’s kid brother Sammy (Robert Winkler) to tag along with the adult characters like Billy Norton in Undersea Kingdom, so I was genuinely shocked when he died in the first chapter (trapped in the burning Amusement Center, a scene more harrowing when it is repeated in a later flashback). In retrospect, I should have recognized his scenes of character development as the equivalent of the buck private who gets shot first, or the cop only one day from retirement. Sammy’s death gives Gene and the other Daredevils a classic motivation for joining law enforcement: justice.

There are two characters in Daredevils of the Red Circle who share names with the characters they play. The first is Tuffie, the Daredevils’ dog, who accompanies them on their adventures and does movie-animal things like sniffing out evildoers and calling attention to clues. The other is Snowflake, the African-American servant who prepares and serves meals in the Granville house, played by Fred “Snowflake” Toones, a character actor who made a specialty of servile comic relief characters. To modern eyes, Snowflake is a regrettable stereotype, a clumsy, cowardly fool who speaks in “sho’ nuff” dialect: he whines and rolls his eyes, thinking a ghost has taken his newspaper when Tiny simply slipped it away when he wasn’t looking; he gets his head stuck when a sliding wall panel closes on it; he drops trays of dishes whenever Tuffie or one of the Daredevils rushes past him. 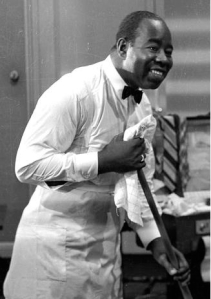 On the one hand, Snowflake is playing a comic relief character in the mold of Smiley Burnette: Smiley was known for playing a likeable dope who often got in the way or loused up whatever he was doing, and, like Snowflake, he often played characters who shared his name. For a character actor, having an established persona was a boon: type-casting wasn’t necessarily a bad thing if it led to steady work. I’m sure Snowflake made a good living playing such characters (although director William Witney stated in his autobiography that Snowflake ran the shoeshine stand at Republic in addition to his film roles). On the other hand, Smiley Burnette was one of many white men in the films he made, and didn’t have to bear the burden of representation; at least in Daredevils, Snowflake is the only black character, and his role–not only a servant but also a clown–is all too typical of the roles black actors had to take (and often still have to take), when they were shown on screen at all. (At least the Republic serials and Westerns Snowflake appeared in were set contemporaneously or in the past: it’s cringe-inducing to see the same stereotypes appear in ostensibly futuristic fare like E. E. “Doc” Smith’s Lensman series.)

Still, it’s not hard to see why Daredevils of the Red Circle has such a high reputation among serial fans: it hums along, rarely growing slack, and for the most part balances action, suspense, and humor expertly. Directors John English and William Witney (responsible for many classic Republic serials) had a knack for staging scenes of dialogue and exposition in engaging ways, so that audiences aren’t simply waiting for the next big fight or car chase. There are spectacular scenes aplenty, including some set in interesting and hazardous locations such as a gas plant full of ladders and catwalks, a flooding underground tunnel, and a burning oil field.

Many of these locations were recreated with miniatures made by the uncredited Howard and Theodore Lydecker, and integrated almost seamlessly; along with the use of rear projection and split screen, Daredevils of the Red Circle is an excellent example of the era’s practical effects and stunt work (famed stuntman Yakima Canutt appears as an uncredited G-man, indicating his likely presence as a stunt coordinator). The score, credited to William Lava but with contributions from Cy Feuer and others, is exciting and imaginative (within the formulaic constraints of the style, which owes much to the operatic scores of Rossini and Weber). It’s worth a watch.

What I Watched: Daredevils of the Red Circle (Republic, 1939)

Where I Watched It: A VHS set from Republic Home Video, vintage 1985 (this very edition, in fact):

Best Cliffhanger: In Chapter Five (“The Ray of Death”), 39013’s men surreptitiously change the wiring in a “gamma ray” at the Black Electro Therapeutic Clinic (another Granville holding) so that it will kill District Attorney Graves when he arrives for his treatment. The Red Circle tips off the Daredevils, who have intercepted the new wiring diagram and take the place of the messenger delivering it to the clinic. After being discovered and imprisoned in a basement vault, Gene escapes and pushes the District Attorney’s gurney out of the ray’s path just in time to save him. But as deadly sparks shower from the ray machine, can he save himself?

Annie Wilkes Award for Most Blatant Cheat: At the end of Chapter Four (“Sabotage”), the Daredevils are tied up by members of 39013’s gang at the Tri-City Gas Plant, with the boilers rigged to explode. The Daredevils break out of their trap and rush to the boiler’s release valve–but too late! The boilers erupt into a fiery inferno!

At least, that’s how it appears at the end of Chapter Four. However, somewhere between chapters the production slipped through a wormhole and was transported to a parallel dimension. Over in Earth 2, as shown at the beginning of Chapter Five, Gene gets to the release valve in time and diverts the boilers’ pressure. Thank goodness for quantum relativity!

What Others Have Said: “The times dictated that serial heroes be white, so talented black performers like Snowflake, whose real name was Fred Toones, were relegated to minor roles, providing corny laughs in otherwise excellent serials like Hawk of the Wilderness and Daredevils of the Red Circle.” –Alan G. Barbour, Cliffhanger: A Pictorial History of the Motion Picture Serial

What’s Next: Bela Lugosi stars in Shadow of Chinatown!