Of course, sometimes less is more: a few carefully selected details can tell us everything we need to know about a character, especially in the visual media of comics or film.  At the very least, putting a familiar character in a new uniform with a new name can work wonders, creating a “reskinned” version of the known character, to borrow a metaphor from video games.  The Justice League are suggested visually in Planetary and The Authority; numerous pulp and comics figures are recognizable in Planetary, and entire worlds where costumed heroes are the norm are presented in works such as Astro City, Top 10, and The Venture Bros.: our escapist fantasy is their day-to-day, and naturally there are connections to familiar characters, sometimes played straight and sometimes distorted like the reflections in a funhouse mirror. 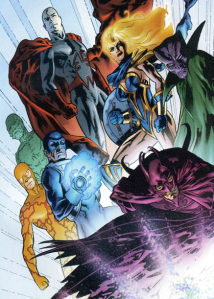 It can be most fascinating when only a hint is given: Berthold, Albrecht, Adolphus, and Gustavus, the companions of Baron Munchausen (themselves a sort of 18th century superhero team) have little backstory or individuality beyond their extraordinary abilities, but I was captivated by them after seeing Terry Gilliam’s 1988 film. Berthold is the fastest man alive (literally faster than a speeding bullet), to the point that he is shackled to a pair of iron balls to keep him in place; Albrecht is a gentle giant, possessed of great strength; Adolphus is the hawkeyed marksman; Gustavus has incredible hearing and can exhale gale-force winds (two abilities that don’t appear related on the surface, but there is a poetic rightness to their pairing). The simplicity of their characterization is tied into their superlative abilities: comic book and fairy tale narratives alike depend on simple, clearly defined characters, who are often boiled down to the pure essence of whatever they are.  Being well-rounded isn’t required, particularly for those in supporting roles.  Munchausen’s companions compare well to Doc Savage’s team of experts or any other team where diverse abilities and personalities are subordinated to a strong leader who can bind them together.

The best example of the power of suggestion is probably the bounty hunter Boba Fett, a “gadget antihero,” whose cool uniform and badass swagger (as has been pointed out many times before, his bona fides were instantly established with two words from Darth Vader: “No disintegrations”) sparked the imagination of Star Wars fans everywhere when he appeared in The Empire Strikes Back.  Even his ironic, thoroughly non-badass fall into the Sarlacc pit in Return of the Jedi took little shine off his reputation.  Sadly, his origin, as established in the prequel trilogy, has only served to deflate his mythic status (along with everything else in the Star Wars universe).  Sometimes it is really better not to reveal too much.

I mean, just look at him.

Television has developed its own conventions for doubles, for reasons unique to the medium.  It’s very common for procedurals like Law & Order and political dramas like The West Wing to fictionalize real-life individuals, with L & O especially prone to using cases that are “ripped from the headlines.”  In addition to the changes of names and inessential details involved, the casting of actors signals the added layer of unreality to the audience: like the use of superhero pastiches, it allows the writer the freedom to embroider or change facts (especially important considering the need to wrap up a criminal case every week, as opposed to the sometimes murky and prolonged real-life cases they’re based on).  Indeed, it’s only one step removed from casting a role in a biopic or docudrama, or impersonating a public figure on Saturday Night Live.  In an era where celebrities, politicians, and other public figures are familiar to audiences through their television appearances, the replacement of one heavily mediated figure with another can be accepted without batting an eye.

Animation is fertile ground for the kind of doubling seen in the comics: it is a visual medium limited only by the imagination of the artists, and most animated shows draw on genres and conventions related to the comics: superheroes, fantasy/science fiction, adventure, and humor, all of which benefit from bold designs and clear characterization based on stock types—in other words, the domain of the archetype and the doppelganger.  Animation does add a layer unavailable to the comic book, however: voice acting.  Just as in the thinly fictionalized cases of L & O, the presence of a familiar actor (even if in voice only) can cue the audience to similarities between characters.  For example, TV’s longtime Batman Adam West lent his voice to the Squadron Supreme’s Nighthawk on an episode of Super Hero Squad Show (“Whom Continuity Would Destroy!”), a not-so-subtle nod to Nighthawk’s model (and one in a long string of self-deprecating turns by West).  Likewise, Kevin Conroy (the voice of the title character on Batman: The Animated Series) appeared as  Captain Sunshine (a character superficially resembling Superman, but whose mansion and relationship with his “ward,” Wonder Boy, clearly parodies the homoerotic subtext often attributed to Batman’s relationship with Robin, the “Boy Wonder”) on The Venture Bros. (“Handsome Ransom”). 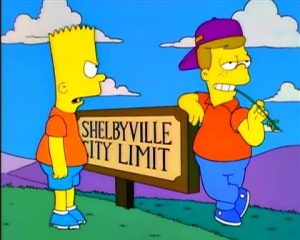 Comedies, however, have really taken the doppelganger concept and run with it in the last decade: it fits perfectly with the self-referential, metatextual idiom that took hold in the 1990s with The Simpsons and Seinfeld, and came to fruition with programs such as Spaced, Arrested Development, and Community.  The Simpsons had its Shelbyville, a mirror version of hometown Springfield, complete with doppelgangers of the main cast (in the episode “Lemon of Troy”).  On Seinfeld, when Elaine started hanging out with Kevin, referred to as “Bizarro Jerry” in the episode of the same name (a reference, of course, borrowed from Superman’s mythos), she found herself at a different coffee shop and with a group that resembled Jerry, George, and Kramer.  (The fact that Bizarro Jerry and his friends were generous and considerate, of course, ultimately excluded Elaine from their company: she didn’t fit in with them.)  Since then, there is hardly a single TV comedy from the last ten years that hasn’t played with the idea of a character or group that mirrors one or more of the main characters.

A theme that runs through many of the examples I’ve cited is one of maturity, even senescence, looking back and reevaluating the follies of youth (the youth of a medium, its characters, or its audience, it makes no difference), what Geoff Klock calls the revisionary narrative. In Gilliam’s film, Baron Munchausen revisits the scenes of his youthful adventures, getting his servants together and confronting the results of his earlier decisions.  The screwed-up lives of professional adventurers and the way their dysfunction is passed from generation to generation is a primary theme of The Venture Bros. (In Gilliam’s film, Berthold was stranded in a cage on the Moon for twenty years after being abandoned by the Baron; Dr. Jonas Venture similarly left trusted companions, experimental subjects, and dangerous inventions behind in the Venture Compound, messes his son Rusty has had to deal with throughout the series.)  And of course, the characters in Watchmen are dominated by the past, ruminating on it, trying to get past it or relive it, digging up skeletons that are better left buried.  Nostalgia, regret, and loss of potency figure in all three narratives.  (Still, I don’t want to overlook the enormous pleasure I get from these stories: even Watchmen, which I wouldn’t exactly describe as “fun,” is exhilarating on account of its ambition and technical achievement.  It has the uplifting quality of a great tragedy instead of just being a giant bummer.)

Special thanks to Matthew Grenier and Adam Byers for helping me sharpen some of my arguments and pointing me toward some examples I hadn’t thought of.  Of course, my wrong-headed conclusions are all my own, and the only blame they deserve is for encouraging me.

Next, I’ll examine pastiche writ large, and a counterexample: Galaxy Quest and Escape From Tomorrow.