Now that Thanksgiving is past, it’s time for the Christmas decorations to go up, and the Christmas music to come out!  In my family, one of our favorite Christmas albums is Holidays in Dementia, collected by the one and only Dr. Demento.  I’ve been a fan of the good Doctor since I was in middle school, although my interest has waxed and waned over the years as with so many youthful obsessions.  Holidays in Dementia was a gift to my wife on our first Christmas as a married couple (I know, but hear me out), in part because I remembered some of the songs on it, and knowing that she was a fan of “Weird Al” Yankovic and similar “demented” humor.  It’s since been played every year during December and has been the source of a number of inside jokes.  Holidays in Dementia was the 1995 follow-up to 1989’s Dr. Demento Presents The Greatest Christmas Novelty CD of All-Time, both released by Rhino.  The contrast between the two albums is interesting: 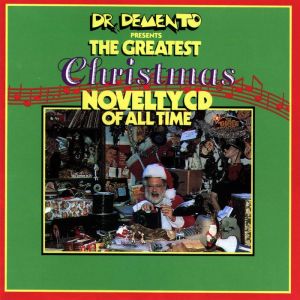 There are a few differences between the two discs: whereas Christmas is right in the title of the first collection, Holidays in Dementia also includes songs dedicated to Hannukah and New Year’s Eve (according to his introduction, the Doctor had intended to represent the winter holidays equally, but there weren’t many non-Christmas songs to choose from).  I wouldn’t argue against any of the songs on The Greatest Christmas Novelty CD; most of the songs on it earned their place through years of airplay.  The downside is that you’ve probably heard them all before.  It’s like having a friend whose favorite rock songs are “Stairway to Heaven” and “Hey Jude”: they’re classics, but not very interesting or surprising as choices.  Still, these are all songs you would want in your library of Christmas novelty songs (doesn’t everyone have one of those?), value added by Dr. Demento’s scholarly liner notes (scholarship genuinely arrived at, I might add: in his civilian identity as Barry Hansen, Dr. Demento has a degree in ethnomusicology, as well as being a crate-digging record collector of the first order, much like his predecessor Harry Smith).  It does cover a wide historical range, from songs that predate Dr. Demento and his influence (you can’t go wrong with Tom Lehrer and Spike Jones, for example) to artists like Demento discovery “Weird Al” Yankovic and others whose primary distribution was through the Doctor’s radio show.  (Incidentally, I had no idea the original Singing Dogs record appeared in 1956.)

If it sounds like I’m putting down The Greatest Christmas Novelty CD, I don’t mean to; it just doesn’t have the same personal connection for me as Holidays in Dementia, and the songs it includes are widely known and available, so even though I like them, I don’t think of this album specifically when I listen to them.  Going through the track list for Holidays, however, I’ve realized there are several that I skip when I listen to it (“A Terrorist Christmas,” a flat recitation of “The Twelve Days of Christmas” with weapons replacing the traditional gifts, doesn’t work for me; unlike the equally dark “Christmas at Ground Zero,” there’s neither wit nor musicality).  But the songs I like, I really like: if a novelty song is going to be a perennial, it either has to be as funny on the hundredth listen as the first (a high bar for any comedy record), or it has to work as a song that just happens to have witty lyrics.  Most of the songs on both CDs fit one category or the other, and some fit both; surprisingly, there are few direct song parodies (“Jingle Bells” turns into “Rusty Chevrolet,” for example; Kip Addotta’s “I Saw Daddy Kissing Santa Claus” rewrites a song that was already a novelty to begin with) outside of the numerous takes on “The Twelve Days of Christmas” (four between the two discs, five if you count its inclusion in “Green Chri$tma$”).  Most of the songs are original.

Perhaps what I respond to in Holidays is the specificity of the songs: both CDs prick the commercialism, sanctimony, and hassle of Christmas, but Bob Rivers’ “The Twelve Pains of Christmas” dissects the misery of the season so expertly, and draws such indelible characters with only a few lines, that it feels universal.  Selected lines have become the standard reference when sending cards (“I don’t even know half these people!”) or putting up lights (“One light goes out, and they all go out!”) in our house.

On the flip side, we might not all be able to relate to the expectant mother of Nancy White’s “It’s So Chic to be Pregnant at Christmas,” the harried single girl of The Waitresses’ “Christmas Wrapping,” or the children of divorce from the Hollytones’ “Christmas is Coming Twice This Year,” but they evoke times and places as clearly as a short story.  So many Christmas songs are narratives to begin with, the line between “seasonal” and “novelty” is fuzzy at best.  The Hollytones’ “Gridlock Christmas” is one of my favorites, and one of the songs I sought out when buying Holidays in the first place: it came out in 1988, and must have been new when I first heard it on Dr. Demento’s radio show.  The tale it spins of motorists making the best of it while stuck on the freeway is ironic but with a core of sincerity: “I’m having gridlock Christmas / With people I don’t even know. / Though friends and family can’t be here / We’ll have good old Christmas cheer / With carols on the car radio.” The song combines a laid back, two-beat country accompaniment (complete with slide guitar) with a jazzy clarinet, and singer Floyd Elliot’s crooning delivery (complete with a Johnnie Ray-style catch in his voice) brings together the contrasting musical elements in the same way strangers are drawn into fellowship in the song.  Is it a testament to the resilience of the holiday spirit, of the way we can turn anything, even nuisances and frustrations, into traditions?  Perhaps, but it’s also just a terrific song.

BONUS VIDEO: In case you felt misled by this post’s title, here’s another Dr. Demento favorite from 1988: “Doctorin’ the TARDIS” by The Timelords/KLF, a mash-up of the classic Who theme and Gary Glitter’s “Rock and Roll Part 2,” complete with a music video featuring authentic special effects from the classic series (I kid, I kid):