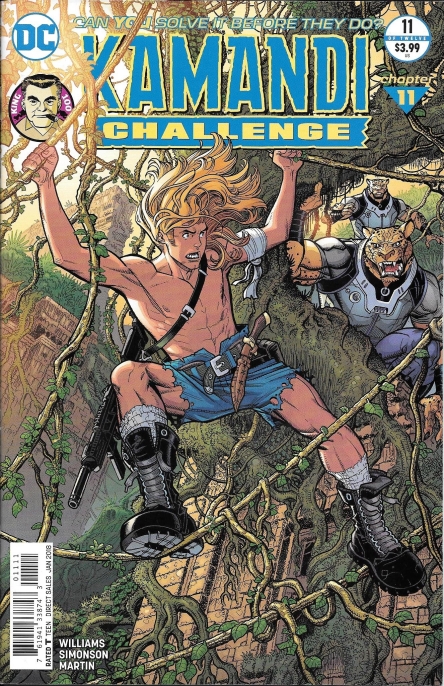 Things are coming to a head: after the Death Worshippers stormed the Tower and shot Kamandi’s mother (who turned out to be the Commander of the Tower and leader of the robot forces who are trying to wipe out all animal life) at the end of last issue, she dies trying to tell Kamandi something about his still-missing father. However, she turns out to be a robot (I knew it!) with a secondary mission. The Tower is not only a building, but an actual rocket, and as the Death Worshippers continue to fight with the robots, the rocket launches into space, taking Kamandi to a final confrontation with the true power behind-the-scenes.

Kamandi continues to fight the robots alongside the Death Worshippers, joined by the shark crew from last issue (now wearing jet-packs: ah, comics!). Although the fight goes against Kamandi and his comrades, he is given a jet-pack by one of the sharks and, after wiping out some more of the robots, makes his way to the control room of the rocket. There, protected from the robots, he sees his friends cut down and realizes that he is once again alone.

Until, that is, one of the screens in the control room comes to life and the true commander of the rocket reveals himself: the Misfit, a genetic freak with a brilliant intellect, who has summoned Kamandi in order to extract the secret that lies in Kamandi’s genetic code. The Misfit, enthroned on his “Tek-Moon,” an armed space station, plans to launch the Anti-Cortexin from space! 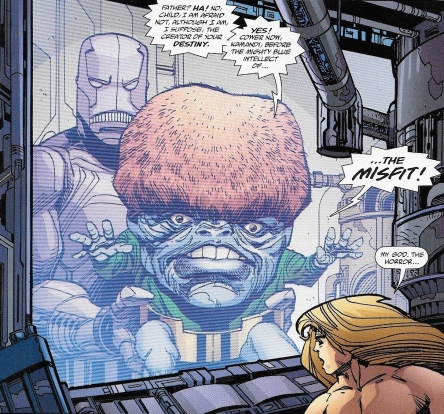 Examining a map, Kamandi sees that the ship is heading over an area marked “UFO activity” and hatches a plan: “Maybe if I press these controls I can somehow uncloak the ship so others below can see it and destroy it,” he says to himself. “A suicidal hope, but what other choice do I have?”

Soon after Kamandi disables the rocket’s cloaking device, a squadron of flying saucers attacks! Not only that, they are being flown by gorillas! (Sharks with jet-packs! Gorillas in flying saucers! Although Kamandi was a Bronze Age creation, there’s more than a little of the free-associative qualities of the Silver Age in this chapter.) The simian saucer pilots, led by the enormous ape Silverbeck, succeed in boarding the rocket with the intention of destroying the Tek-Moon once and for all. An orangutan named Royer (undoubtedly a nod to Jack Kirby’s long-time inker Mike Royer) discovers Kamandi and convinces Silverbeck not to kill him. Kamandi reveals the projected image of the Misfit to Silverbeck and Royer (“By the Severed Paw! What horror!”), who exchange threats.

The Tek-Moon opens fire on the rocket; when the Misfit lets slip that he could reunite Kamandi with his still-living father, Kamandi commandeers the rocket controls and prepares to ram into the Tek-Moon (suicide missions are a theme in both this chapter and the series as a whole), determined to find his father or die trying.

Fighting against the ape warriors who would pull him back, Kamandi flies directly into danger, set on learning the truth about his parents; but the Tek-Moon’s weaponry is too much for the rocket, and the bridge is blasted open and exposed to the vacuum of space just before it reaches the Tek-Moon. Kamandi is flung into space and the last shot we see is him tumbling toward the Earth below. To be continued?? (Yes, two question marks are needed to convey the uncertainty of this cliffhanger!)

“Enter . . . the . . . Misfit!” has a bit of a Star Wars vibe, at least visually: the command center of the rocket ship resembles the bridge of the Death Star in Return of the Jedi, and of course there is the armored space station, poised to rain death on an unsuspecting world below. Such doomsday weapons are a staple of science fiction, but the Death Star is the most obvious example. So, too, the Misfit (a Kirby creation who first appeared in Kamandi no. 9, with a similar germ warfare scheme) reminds me of Emperor Palpatine: a fitting antagonist to introduce at this point, warped physically and mentally, but holding out the tantalizing promise of solving the mystery of Kamandi’s origins and destiny. (Walter Simonson, the artist, worked on a number of science fiction comics over the years, including Marvel’s Star Wars adaptation, but he is best known for his long run on Thor, and the combination of far-out, alien places and weird characters is a good fit for him.)

The map that Kamandi studies aboard the rocket ship is, of course, modeled after the map that Jack Kirby provided during the early days of Kamandi, and which was fleshed out by later writers. Greg Pak, who wrote last month’s chapter, mentions in his afterword in this issue (in which he describes how he would have gotten Kamandi out of the cliffhanger if he had continued writing it) that he was assigned sections of the map to include in his chapter. I hadn’t realized that the challenge included specific territories, but in hindsight it explains the thoroughness with which Earth A.D. has been explored in this series. Some have been returns to places Kirby and his successors already visited in their series; others have been freshly revealed glimpses of places that were only names on the map up until now. 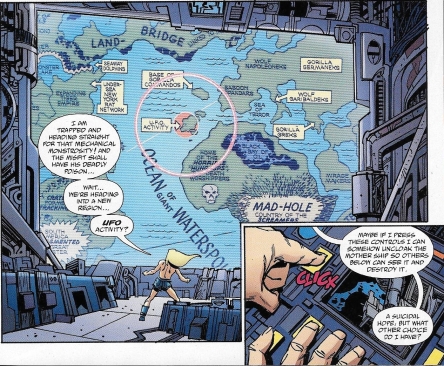 Over the course of this series, it has been interesting to observe how different writers treat the influence of Jack Kirby. Some have used Kirby’s characters and settings to tell stories more or less within their own style, while others have either emulated Kirby’s dynamic (some might say bombastic) manner or turned their stories into direct tributes (if Royer in this chapter is an homage to Kirby’s collaborator Mike Royer, does that make Silverbeck Kirby himself, I wonder?). In this chapter, writer Rob Williams seems to delight in some old-school comics techniques, most notably the use of play-by-play dialogue that describes things as they happen (“The talking human fights like a three-armed ape! We are wiping out the robot crew!”).

Nobody talks like this except comic book characters, and here it takes the place of verbose caption boxes, which otherwise appear only at the beginning and end of this chapter. It frequently turns toward the goofy (Kamandi says of the Misfit, “Indeed, he is truly a pumpkin-headed toad!”), but Silverbeck and the Misfit are especially prone to the kind of over-the-top rhetoric that Kirby deployed regularly (and which my regular readers know that I am powerless to resist). Whether it is the “Misfit majesty” giving orders to “Open fire with every weapon upon this bountiful and deadly Tek-Moon!” or the gorilla UFO commander calling Kamandi “a fool and not of the Silverbeck wisdom!”, “Enter . . . the . . . Misfit!” is, from its title on down, a story that oozes an affection for the comics medium and its more whimsical expressions.