International Airways is under attack! The fledgling enterprise, assembled by a multinational group of businessmen with the intent of uniting the world through travel and trade, is suffering mysterious air wrecks in its Mongolian territory. Construction on the airfield is threatened, and if the wrecks persist it will mean the end of the entire operation. The disasters are the work of the elusive “Dragon,” a faceless criminal mastermind who speaks through special radio receivers hidden in prayer wheels, fans, and even airplane propellers. In response to the attacks, Ace Drummond, “G-Man of the Air,” arrives from his base in Washington to investigate.

Although he finds many allies–among them young Billy Meredith, son of one of the Airway board members; Jerry, an enthusiastic mechanic and pilot at the airfield; and Peggy Trainor, who has come to Mongolia in search of her missing archeologist father–this foreign territory is filled with potential enemies, any one of whom may be the Dragon or one of his subordinates. Is it Dr. Bauer, the explorer who holds Professor Trainor hostage in hopes of wresting the secret location of a mountain of jade from him? Or is it the monk Kai-Chek, who rails against the intrusion of foreigners and their “devil birds” in Mongolia? Or perhaps it is Henry Kee, the Mongolian member of the committee, or Johnny Wong, the furtive Chinese radio operator. Or it could also be Winston, a member of the committee eager to shut down operations in the face of the Dragon’s terrorism. Or it could be one of the other dozen characters who come under Drummond’s suspicion: the G-Man of the Air has his work cut out for him in the thirteen-chapter serial, Ace Drummond!

Like Tailspin Tommy, Ace Drummond was a comic strip that rode the wave of the public’s fascination with aviation in the 1930s before being adapted into a movie serial, but Ace Drummond relied on exotic locations and a global scale much more than the down-to-earth Tailspin Tommy. The comic strip was created by World War I hero Eddie Rickenbacker, who lent his name and expertise and contributed scripts to the strip. Every chapter of the serial opens with a portrait of Rickenbacker, “America’s Beloved Ace of Aces,” and recaps the previous chapter with a clip of a newspaper comics page being unfolded and a zoom-in on panels that relate previous events. Rickenbacker also took an active hand in promoting the Ace Drummond serial, forming a “Junior Pilots Club” to generate fan excitement.

Ace Drummond is also a musical, sort of. Recall that in The Phantom Empire, Gene Autry had to perform a song every day in order to keep his radio contract. One might think that Ace Drummond had a similar contract, as he tends to burst into song whenever a chapter has some time it needs to fill. Leading man John King had been a popular singer before making the jump to acting, and after Ace Drummond he would go on to play a number of singing cowboy roles (most notably “Dusty” in Monogram’s Range Busters series), so it makes sense to feature his talents. Here’s the thing, though: it’s always the same song, “Give Me a Ship and a Song” by Kay Kellogg. Drummond first sings it on the clipper ship into Mongolia to calm down the passengers (understandably nervous, since apparently half a dozen planes have crashed, but this is the first passenger plane to make the trip): a passenger turning the dial on his radio tells a flight attendant, “I’d give a million dollars to hear a great jazz band.” The attendant suggests a station, and the music switches to something that isn’t jazz at all: the intro to “Give Me a Ship and a Song,” which Drummond sings in full to the appreciative passengers. Later, Drummond sings the same song to entertain Peggy Trainor; to entertain the mechanics at the airfield; to test a radio receiver; and he even plays a phonogram record of himself singing in order to fool one of the Dragon’s henchmen sneaking around the airfield. Obviously, the repetition would be less obnoxious if I were watching the serial week to week instead of all at once, but as a transparent attempt to generate a hit, it flopped.

The action in Ace Drummond fares better: Ace saves the plane from an attack–the Dragon is able to zap the pilots with electric shocks through the radio, as well as having a ground-based “death ray” that can down smaller planes–and, spotting a biplane circling just before the attack, he bails out and tracks the plane to the camp of Dr. Bauer (Fredrik Vogeding) and his associate Wyckoff (Al Bridge). The two explorers claim to be searching for the lost tomb of Genghis Khan, but they have Professor Trainor (Montague Shaw) held prisoner in a dungeon. Trainor’s daughter Peggy (Jean Rogers) has just shown up on her father’s trail, and Bauer and Wyckoff hope to hold her as well in order to force her father to give up the jade mountain’s location, but Ace rescues her just in time and takes off in Bauer’s plane. Struck by the Dragon’s death ray, the plane crashes into the wall of the village monastery, bringing in another group of characters. 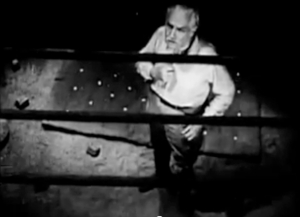 The monk Kai-Chek (Chester Gan) calls for the foreigners to be punished for violating the sacred temple, but the Lama (Guy Bates Post) cautions against reacting with anger to what was obviously an accident. Throughout the remainder of the serial, the Lama and his fellow monks are an important resource for Drummond and his allies, translating and providing wisdom as well as communicating with the natives (who are never given much more characterization than a mob of undifferentiated foreigners). More importantly, the monastery is a colorful set full of secret passages and traps, including a room with a mechanized wall designed to close in and crush anyone unfortunate enough to be trapped within. The Lama pleads ignorance of the deadly trap; it’s left unclear until the very end whether the Dragon actually has a connection with the monastery or is simply taking advantage of its secrets. 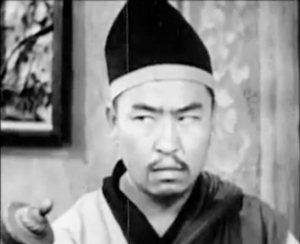 Ultimately, that points to the weakness of Ace Drummond: the excessive number of suspects and subplots grows wearisome in later chapters, and when some characters who were under suspicion are later revealed to be innocent, their earlier actions don’t make a lot of sense. It’s one thing for the audience to get confused–that’s part of the sleight-of-hand involved in mystery storytelling–but it’s less satisfying when one senses that the writers themselves don’t quite have a handle on the plot. There are simply too many red herrings, and it’s almost comical to hear the repeated exclamation, “So you’re the Dragon!” aimed at one character after another in the last few chapters, until at last the real Dragon is unmasked.

Still, that complaint aside, the serial has many good qualities: although there is less time spent flying than in Tailspin Tommy, there is enough aerial action to demonstrate Drummond’s prowess and Rickenbacker’s expertise, and of course the entire plot is motivated by the defense of a commercial airline venture, a business Rickenbacker had also been intimately involved with as the manager (and later owner) of Eastern Air Lines. The Mongolian setting, while open to charges of exoticism (indeed, the lure of adventure in strange foreign places is the entire hook for this genre), is unusual and provides for some original locations and opportunities for action. 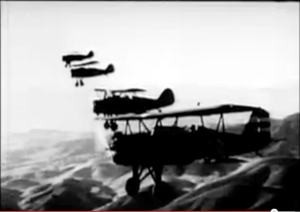 In addition to the actors already mentioned, the cast includes a number of familiar faces: Lon Chaney, Jr. appears as Ivan, the lead henchman; Noah Beery, Jr. plays Jerry, who could be twins with Skeeter, the character he played in Tailspin Tommy; as Billy, Jackie Morrow provides the requisite spunk, without being too annoying; and veteran Montague Shaw is reliably paternal in the kindly old scientist role. 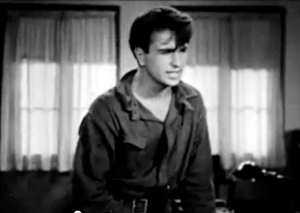 Finally, the Dragon himself, unrevealed until the last chapter, makes for a dramatic presence, speaking in a booming voice through his spinning receivers, always closing his missives with an authoritative “THE DRAGON COMMANDS!” or “THE DRAGON HAS SPOKEN!” It makes a big enough impression that each chapter ends with the typical title card instructing audiences to see the continuation next week in the same theater, accompanied by a fire-breathing dragon and that same voice over: “THE DRAGON COMMANDS!” It’s not a request.

Where I Watched It: TCM ran several chapters of this serial earlier this summer, but for this article I watched it on (and collected screen shots from) YouTube.

Best Cliffhanger: In Chapter Five, “Bullets of Sand,” Peggy and Billy investigate Dr. Bauer’s operation, hoping to find proof that the German explorer is secretly the Dragon. Bauer and Wyckoff are holed up in “the Hall of Dead Kings,” a tomb complex carved into a mountainside and full of treasures. Their camp employs a dozen natives, digging and cleaning up artifacts, including sand blasting jade urns. While snooping in Bauer’s office, a separate building, Peggy and Billy are locked in. Billy climbs up the chimney and escapes, but before he can let Peggy out from the outside, he must hide from the approaching workmen to escape detection. He hides in one of the urns, just before the workmen begin cleaning out the inside of it with the sand blaster! A shot straight up the barrel of the sand blaster ends the chapter, leaving us in suspense.

Sample Dialogue (from Chapter Thirteen, “The World’s Akin”):
Dragon: “We have a saying in Mongolia: he who smiles at the grave’s edge takes happiness into the world beyond.”
Jerry: “We got a saying in America, too, though: don’t count your chickens before they’re hatched!”

What Others Have Said: “For a time it was thought that the airplane film might supplant the Western in the affection of the young, but, air age and all, it didn’t happen. Situations involving airplanes were woven into many serials and adventure features; yet the number of serials centering upon aviation never matched that of films set in the West. Nonetheless, in the New Deal era at least one air adventure could be expected to appear each year among the ranks of serial dramas. . . . As a matter of fact, the aviation cycle would soon be lost in space–and in war clouds. Not many old-fashioned, seat-of-the-pants flying flims would be made after Flash Gordon took off for Mongo and World War II revolutionized aeronautics.” –Raymond W. Stedman, The Serials: Suspense and Drama by Installment

What’s Next: Join me next time as I examine Tim Tyler’s Luck.