In watching the 1944 Captain America serial (for which I’ll have a full write-up next week), I was struck by the title of the first chapter, “The Purple Death,” a title shared by the first chapter of the 1940 serial Flash Gordon Conquers the Universe. In Captain America, the Purple Death refers to the extract of a rare orchid that makes its victims susceptible to hypnotic control (the “death” part comes when the victims are ordered to kill themselves, helpless to resist); in Flash Gordon, it’s a mysterious, fatal disease spread from Mongo to Earth that leaves its victims marked by a purple spot.

The pulps (as well as comic strips and serials) were known for lurid, vividly-drawn stories with larger-than-life heroes and impossibly wicked villains to match. Purple is an attention-getting color, to the point that we speak of “purple prose.” I was also reminded of the Purple Empire, one of the enemy nations that Operator #5 fought against in the 1930s. (I thought there might be some significance to that, but the Operator series included a rainbow of enemy nations, possibly influenced by the color-coded War Plans developed by the U. S. military during the 1920s and ’30s.) 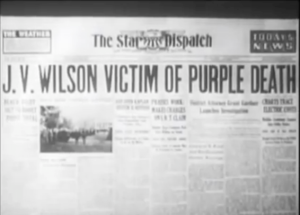 In reading and watching stories from the 1930s and ’40s, I’ve encountered the phrase “purple death,” or uses of purple as a dangerous and dramatic color, enough times that I wondered if there was an underlying connection. So, in the spirit of Philip J. Reed’s Pop Questions, I’m asking: what’s the significance of the color purple in the pulps, and why particularly is death purple? Does it refer to the livid color of a bruise or the marks left by strangulation? Is it the association with royalty, by extension gaudy and powerful? I have a few leads that seem likely, but if anyone reading this has a specific answer, I’d love to hear it. 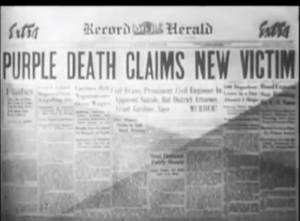 Purple is associated with death and mourning in many cultures, including the Victorians of the nineteenth century, for whom purple was the color of “demi-mourning,” to be worn after a period of wearing black. It was also the color of royalty, originally due to the rarity and high cost of purple dyes in the ancient world. It would certainly match both the dramatic style and frequent (if shallow) references to history and classic literature in the pulps if that were the reason. I don’t have statistics at hand, but my hunch is that as comic books became the dominant medium for pulp storytelling, more villains than heroes had purple uniforms or color schemes.

However, the most likely answer goes back to the 1918 influenza epidemic: the disease killed quickly, and often left its victims purple in color as their lungs filled with blood and starved the body of oxygen. One book on the subject is even titled Purple Death. According to some estimates, as many as 50 million people worldwide died during from the disease. Just as pulp heroes were often veterans of the Great War, so the memory of the epidemic would have resonated with writers and readers in the decades that followed. In Flash Gordon, the Purple Death was also a disease, and the scenes of public panic and the scramble to find a cure hearken directly to the 1918 epidemic; by comparison, the use of the phrase in Captain America is almost poetic, but would likely have still induce a twinge of fear for those who remembered it. Even today, with no direct memory of the influenza epidemic, it sounds ominous.

So perhaps that’s the answer. If any readers have more details to offer, or facts to contradict my speculations, I’d love to hear them. Any other examples of purple as a color marking death or danger are, of course, welcome.