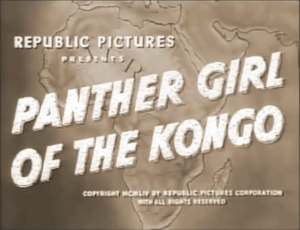 While filming wildlife in the jungle for a foundation, Jean Evans and her native guides stumble across a terrifying monster: a giant, horse-sized crustacean with huge pincers. The chief of the Utanga people, Evans’ hosts, suggests that she contact Larry Sanders, a hunter on safari in the area, and enlist his help: “Bwana Sanders big hunter,” says Timbu, Evans’ rifle bearer. “He go with us, me go.”

In the mean time, two other white men in the area are causing trouble: Cass and Rand, first posing as hunters, try to intimidate Sanders into leaving the area. As the audience soon finds out, the pair is in the employ of Morgan, a chemist living on his own in the jungle. Morgan has discovered that an abandoned gold mine in the jungle is full of diamonds, and he’s using a “hormone compound” of his own creation to turn ordinary crawfish into the giant “devil beasts” to scare off intruders. He must be careful, however: the monsters are useful if they frighten the natives away from the mine, but if Evans and Sanders are able to bring proof of their existence to the colonial authorities, a force of soldiers is sure to be sent in to clean up the district, spoiling Morgan’s plans.

So begins Panther Girl of the Kongo, almost the last serial Republic produced (only one more, King of the Carnival, followed). Since I’ve been watching serials for Fates Worse Than Death, I’ve idly speculated about a combination of the serial format and its two-fisted plotlines with the monster movie, another favorite genre. Panther Girl is in many ways that film, although it is closer in spirit and technique to Them! and the other “giant bug” movies of the 1950s than it is to Godzilla or any of the rampaging kaiju films that followed.

It should be immediately apparent that the “devil beast” (alternately, “claw monster”) actually is a normal crawfish filmed in extreme close-up to make it look large, sometimes surrounded by miniature props (provided, as always, by the Lydecker brothers, Howard and Theodore, who at least receive onscreen credit this time) to give it a sense of scale. Even better, the actors are sometimes inserted into the foreground via rear projection, relying on perspective to enhance the illusion, but just as often the creature’s size is implied through the magic of editing. And when someone is unfortunate enough to be attacked by the devil beast, it takes the form of a single enormous claw extending from offscreen, like the giant hand grabbing Fay Wray in King Kong. 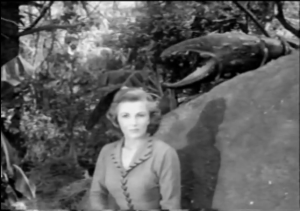 Other than the formal restraints placed on it by being a serial–division into chapters with contrived cliffhanger endings–Panther Girl feels very much of its time: by comparison to the often melodramatic serials of the 1930s, it’s very no-nonsense, with an emphasis on the professional competence of the two leads. Although thankfully not as inert as Radar Men From the Moon, the characters are fairly dry, emphasizing that they have jobs to do and they’ve got to be done right. Even the “mad scientist,” Morgan, plays things cool: he’s in it for the money, not revenge or a grand scheme to remake the world. Other than the trendiness of the mammoth crawfish (which invite comparison to director Bert I. Gordon‘s similar low-budget giants), the small scale of the action and limited number of characters make it feel very much like a television production.

Television was surely having an impact: although Panther Girl was released in theaters, Republic obviously made the film with an eye toward repackaging it for broadcast. Other than the first chapter, which is about twenty minutes long, all the chapters are about thirteen minutes in length. Two chapters could be aired during a half-hour block with room to add commercials. A number of serials had already been cut down to feature length and licensed for television broadcast, and several characters who had appeared in theatrical serials had made the jump to TV-only productions. Even the actors in Panther Girl were doing most of their work for the small screen. In the face of competition that kept audiences–especially kids–at home, the serials were on their way out.

The lead actress, Phyllis Coates, had played Lois Lane on television opposite George Reeves in Adventures of Superman (she had also appeared in a previous serial, Jungle Drums of Africa, with Clayton Moore, television’s Lone Ranger; I haven’t seen it, but it doesn’t seem to have been very impressive). Myron Healey, who played Sanders, was a prolific character actor usually cast as the heavy; most of his credits were from television. In 1955, the year Panther Girl was released, he had parts in over twenty films or TV episodes. His performance here reminded me of Russell Johnson’s Professor on Gilligan’s Island.

Commentators have noted an increased reliance on stock footage during Republic’s later years, another sign of pinched budgets. In the case of Panther Girl, the scenes of Evans (who, in a flashback, earned the title “Panther Girl” by saving the Utanga village from a black panther that had been prowling around and attacking the villagers) swinging from vines and mounting a tame elephant were repurposed from Jungle Girl, an earlier serial starring Frances Gifford. That is apparently the main reason Evans appears to have gone native in a short buckskin tunic.

Her costume and familiarity with vines aren’t the only traits she owes to Tarzan and the jungle monarchs who preceded her. Both Evans and Sanders take the natives’ obedience for granted: the Utanga speak pidgin English and address the whites as “Bwana” (“boss,” “master”) and although they sometimes have to be persuaded to take a course of action, they mostly fall in line. When Evans and Sanders conceive of digging a pit to trap one of the devil beasts, Sanders says, “Let’s head back to the village and get the natives started.” (Morgan also has a tribe of natives to boss around in addition to his two white henchmen: the Returi are addicted to a “tonic” he supplies them with and will do his bidding to get it.)

Although minor, there are pleasures to be found in Panther Girl of the Kongo: the giant crawfish is imaginative, if not exactly scary, and the two leads are a pair of likeable squares who work well together. Morgan (Arthur Space) isn’t the most compelling villain but his plans lead to a dramatically satisfying increase in peril for our heroes, from stolen evidence to quicksand, then to being shot at and blown up with dynamite. On the negative side, the representation of African natives obviously wouldn’t be acceptable today; it’s one cannibal cooking pot away from hitting almost every stereotype imaginable and says more about the popular image of colonialism than the reality. (A pair of stiff-upper-lipped Brits in pith helmets show up to handle the Returi tribesmen toward the end, but they’re hustled offstage quickly so that Evans and Sanders can confront Morgan by themselves. If those British soldiers wanted in on the action, they should have gotten their own serial.)

What I Watched: Panther Girl of the Kongo (Republic, 1955)

Where I Watched It: The whole thing is posted on YouTube.

Best Chapter Title: “Test of Terror” (Chapter Five). The test in question is the “Test of the Lion Men,” in which Jean Evans reassures the doubting natives that she still has the protection of the gods by entering an arena and killing a lion. Based on the costumes, and the fact that this interlude makes no sense, I assume it’s also cribbed from an earlier film.

Best Cliffhanger: At the end of Chapter Three (“The Killer Beast”), Evans is captured by the Returi and tied to a tree while one of the tribesmen plays a drum to lure predators from the jungle. The goal is to fool the Utanga into believing that the Panther Girl has been slain by wild animals. A gorilla attacks her while she’s tied up, and Sanders is unable to help her after being knocked out by the Returi.

Annie Wilkes Award for Most Blatant Cheat: Most of the cliffhanger resolutions play fair. The most questionable is at the end of Chapter Ten (“Blasted Evidence”), in which Cass and Rand throw a bomb through the window of Evans’ house where she and Sanders have just shown the district police inspector the film of the devil beast, convincing him to send reinforcements to the district. It appears that the bomb explodes immediately, engulfing the house in a great fireball. 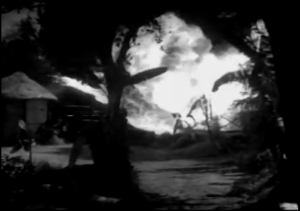 However, as shown at the beginning of Chapter Eleven (“Double Danger”), the bomb doesn’t detonate right away, and the three have the chance to flip over a table and shield themselves from the blast. Even so, I’m not sure how they escaped being burned alive.

Biggest Surprise: I fully expected the mad scientist Morgan to die at the hands–er, pincers–of one of his own devil beasts. It just made sense: he grows the things in a crate right in front of his own house where the final showdown occurs, and the filmmakers even make a point of having Evans and Sanders discover it, solving that part of the mystery. But that’s it: I won’t share how he gets his comeuppance, but it isn’t death by claw. Perhaps there was originally an intent to deliver poetic justice but filming it didn’t work out. In any case, the ending makes it seem that the devil beasts aren’t really that dangerous, aside from that nasty pinch.

What Others Have Said: “Panther Girl of the Kongo could not save the Republic serial from extinction. The first and last female serial star from that studio wore the same jungle garb. But the clothes and every setting and situation they appeared in, in 1955, was secondhand and worn out.” –Jim Harmon and Donald F. Glut, The Great Movie Serials: Their Sound and Fury