According to conventional wisdom, newspapers are in a fix because instead of reading them, everyone is getting their news from the Internet. One attempt to make the newspaper experience more interactive is the “Opinion Line,” a section of the editorial page made up of short, anonymous comments provided by readers who send them in or (ironically enough) leave their comments on the newspaper’s website. No longer is the writer required to lick a stamp or even sign their name to have their view printed, and the Opinion Line often becomes a partisan tug-of-war, full of snide put-downs of the Other Side.

There are many to reasons to be dismayed by the comments of the Opinion Line, but one that never fails to vex me is reading a joke or aphorism that has already gone around Facebook or Twitter days or weeks before, and is more than likely already played out, gone from original to viral to cliché, with the Opinion Line—a paper Twitter feed for the elderly and out of touch—as the final, senescent stage of its life cycle.

Memes have always been around, even in the pre-Internet days when pictures, signs, and jokes would circulate like chain letters in offices and schools. Classics like the mouse flipping off a hawk, its outlines fuzzy through multiple generations of photocopying, or signage reading, “I can only make one person happy per day; today isn’t your day, and tomorrow isn’t looking so good either,” were ubiquitous, a lingua franca of the workplace, a passive-aggressive way of saying, “You don’t have to be crazy to work here . . . but it helps!” Although the passing around of in-jokes has largely migrated to the electronic ether, first through the e-mail forwards that you likely still receive from a few older friends or relatives, and then to Facebook and Twitter, such slogans can still be seen on coffee mugs and other gift items in actual physical space. Memes will find a way.

I was reminded of those old photocopied proto-memes when I uncovered a copy of Baxter Lane’s Scrapbook of Famous Quips & Quotes that I had purchased as a kid. The contents of this 64-page booklet are exactly what the title promises: a collection of pithy sayings, some attributed and some anonymous, on such universal subjects as work, marriage, and politics (the latter without much of a partisan edge beyond “How about those clowns in Congress?”). Although Famous Quips & Quotes is slim, it was of a piece with the dictionaries, trivia collections, and other miscellanies I could spend hours flipping through as a young reader. Along with such classics of browsing as The Guinness Book of World Records and Tom Burnam’s immortal Dictionary of Misinformation, collections of aphorisms were a favorite pastime. You just never knew what tidbit you might find, and many of the sayings and factoids I read back then have stuck with me.

Such collections are still published, of course, including standbys like Bartlett’s Familiar Quotations. In fact, the Baxter Lane Company is still in business, at least according to the online Yellow Pages: they don’t appear to have a web site of their own. Good for them. Located in Amarillo, Texas, Baxter Lane is listed as a “souvenir” or “gift shop” business: I’m sure I picked up my copy of Famous Quips & Quotes at a Stuckey’s or Nickerson Farms, and I could probably still find a Baxter Lane edition at my local Cracker Barrel. The back cover of the booklet even has “FROM” and “TO” address spaces and a square for third class postage, so you can send it in the mail as a postcard. “IT ISN’T NECESSARY BUT YOU CAN SEAL HERE WITH SCOTCH OR GUMMED TAPE IF YOU WANT TO,” reads a helpful caption along the edge. 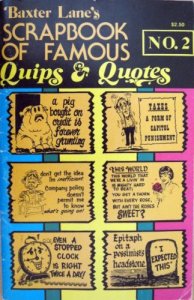 “You can make the people follow the Way, but you can’t make them understand it.” –Confucius

In looking for online traces of Baxter Lane, I uncovered evidence of other booklets they have published over the years: many are cookbooks, but collections of aphorisms and folk wisdom are prominent (including a second volume of Famous Quips & Quotes). One of them, Honorable Confucius Says by Herb Walker, was published in 1977; also 64 pages in length, it is said to contain “authentic Confucianisms as well as words of wisdom from other sources,” so it is, in other words, probably not too different in character from Famous Quips & Quotes.

Needless to say, almost any clever-sounding or cryptic aphorism you could think of has been or could be attributed to the Chinese sage K’ung Fu-Tzu; some of them, such as the famous curse “May you live in interesting times,” are as recent as the twentieth century. That’s not even mentioning the many uses of Confucius to set up a pun or dirty joke (there’s a lot more where this one came from), a tradition predating the Internet:

Jokes aside, Confucius and his sayings are the subject of The Analects, a volume I discovered a little later in life but recognized immediately as a more sophisticated example of the browsable collections I had grown up with, comparable in its significance to the Biblical Book of Proverbs, a similarly deep collection of teachings and sayings. In the words of scholar and translator Lin Yutang,

The Analects is generally regarded as the Confucian Bible, being a miscellaneous, unclassified and unedited collection of the remarks of Confucius on various occasions, mostly without any suggestion as to the circumstances in which the remarks were made, and certainly torn from their context. (Yutang, The Wisdom of Confucius)

Given my tastes, how could I resist such a collection? The lack of context was both a pro and a con: the book is easy to dip into, but there are many head-scratchers. For every clear and simple lesson, there is another tangled in history or symbolic meaning. On the subject of context, Yutang continues:

It is illuminating, for instance, to read in the Analects the remark by Confucius that “I have never seen people attracted by virtuous scholars as they are by beautiful women,” and then to learn from Szema Ch’ien that he made this remark after he had paraded the streets of Wei in a carriage with a beautiful queen, and found the people looked at the queen but did not look at him. The text of the Analects itself does not mention the circumstance, and actually puts it in the form of a more abstract remark: “I haven’t yet seen people who love virtue as they love beauty.”

That is a favorite example of mine, not because it deflates Confucius, but because it humanizes him; it teaches us something about vanity, although perhaps not the lesson Confucius thought he was imparting.

A little healthy skepticism isn’t a bad thing when reading such sayings. The best aphorisms provoke thought; memes substitute for it and are deployed to shut down arguments. One of the worst offenders in this regard is the “Condescending Willy Wonka” meme, its popularity based on Wonka’s well-known views in favor of Second Amendment rights:

Or wait, was Wonka in favor of gun control?

Like Confucius, Willy Wonka is now merely a vessel, a mouthpiece for whatever views we choose to attribute to him. The only difference is the speed at which memes can be generated.