This past weekend I had the opportunity to hear the Wichita Symphony Orchestra’s performance of Bartók’s 1911 opera with Samuel Ramey in the title role, enhanced by Dale Chihuly’s glass sculptures (seen above). A deeply penetrating psychological study, the opera is based on the fairy tale about a young bride who uncovers her new husband’s bloody secrets, but the text (by Béla Balázs) replaces a literal retelling of the story with one almost completely interior. Productions typically include staging that brings out the symbolism in the text (such as Michael Powell’s 1963 production for West German television that places a nuptial bed at the center of the action), and Chihuly’s sculptures were no exception. The sculptures, in the shape of spears, bulbs, flowers, and more, represented images as diverse as an armory, a hoard of gold and jewels, and a lake of tears. 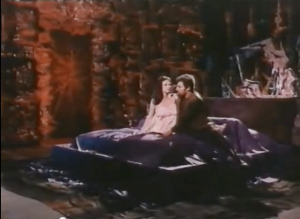 A particular challenge to the stage director is the ambiguity of the ending; Powell’s direction can be read as an interrogation of coercion and consent, with the clear implication that Judith dies to learn the truth. For the WSO’s performance, Marie Allyn King chose to keep the ending mysterious, allowing the audience to reach their own conclusions. In any case, Judith’s character arc is a tricky path for any actress, and one which Nancy Maultsby successfully threaded, both pushing Bluebeard to uncover his secrets (at one point she turned the tables on Bluebeard with a gesture as simple and economical as a hand raised in denial of him) but fearing what she may uncover. (In this regard, Bluebeard’s Castle has much in common with the sumptuous gothic horror of Roger Corman’s Poe films, making the truth something to be both yearned for and dreaded.) King’s staging and Maultsby’s performance suggested, at least to this viewer, that Judith ultimately fell victim to the powerlessness of being put on a pedestal: the prison of royalty. As Ramey said in a Q&A after the performance, “She was warned!” 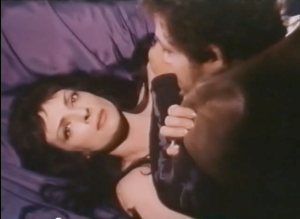 Here’s what I wrote for the Wichita Eagle.