I used to be a real pack rat when it came to newspapers (used to, I hear my wife saying).  While going through some boxes that had been at my parents’ house for about twenty years, I found quite a few papers and magazines that I had saved for one reason or another: historical value (“Clinton Sweep,” read the headline of the Wichita Eagle the day after Bill Clinton’s 1992 election) and souvenirs of places I’d been, but also stories that seemed dramatic or exciting to me, and which, in those heady days, I thought might be the basis for a dramatic work.  I was very much under the spell of contemporary dramas like David Henry Hwang’s M. Butterfly and John Adams and Alice Goodman’s Nixon in China; it seemed that any out-of-the-ordinary story might have sufficient conflict or resonance to turn into an opera or play.  I was fairly susceptible to any kind of cultural theory that came along, so my early thoughts about aesthetics were a jumble of second-hand Marshall McLuhan, Peter Sellars, and Gilbert Seldes, cut liberally with the provocative Dadaism of the Residents and Frank Zappa.  At one point I set a few comic strip texts to music, partially as an exercise, but also believing that “mass media” sources were the natural successor to the communal folk sources that had informed the classical tradition from the eighteenth to the early twentieth centuries.  Don’t get me wrong, those are still areas of interest to me, but like a lot of teenage “artistes” I was trying way too hard.  In any case, my own subsequent experience, not to mention the flood of shallow, hacky biographical operas that became trendy after Nixon‘s success, showed me that it wasn’t as easy as it looked, and not every news story held a grain of dramatic truth waiting to be turned into poetry.

One article I found that I still remembered vividly appeared in the Wall Street Journal of Tuesday, October 15, 1991: “Odd Tales of UFOs And Sen. Bob Dole Visit Russell, Kan.” by staff reporter (now WSJ editor) Kevin Helliker.  The disappearance of four women from Russell cast a spotlight on local writer Donna R. Butts, who had published a book about her contact with space aliens (and who was among the missing). According to her book, the Second Coming would begin as soon as Kansas Senator Bob Dole, who grew up in Russell, was elected president and moved the White House to his hometown, among other apocalyptic prophecies.  Members of Butts’ group of believers included local art teacher Gertrude “Trudy” Furney, whose public sculpture of the Seventh Trumpeter from the Book of Revelation sat (and still sits) in Russell’s Lincoln Park.  According to Rural Kansas Tourism, the sculpture (now popularly known as the Angel in the Park) “was constructed in 1988 to symbolize a turnaround of the local economy and a new beginning.  The artist’s idea was to portray that when the angel blows the 7th trumpet, better times and new beginnings were ahead.”

It was apparently not unusual for the sculpture to be interpreted in more literal terms, however: according to Helliker’s article, the disappearances set off a wave of anxiety.  “Students at Bickerdyke Elementary School, located across the street from the Seventh Trumpeter sculpture, swore they saw the angel’s trumpet move.”  Psychologists were brought in to counsel the panicked students.  The public library was overwhelmed with requests for Butts’ book, and UFO sightings in the area spiked.

I didn’t live in Russell, but the atmosphere of expectant foreboding described in the article felt familiar.  In the fall of my freshman year in high school, a brilliant light on the horizon convinced a number of people in my hometown that the Second Coming had arrived, or so I heard; it was the lights from the football stadium for the first home game, seen through an unseasonal haze.  There was a lot of that going around in the late 1980s and early ’90s, enough that director Richard Kelly’s decision to set his spooky 2001 film Donnie Darko on the eve of the 1988 presidential election felt weirdly appropriate.  In hindsight, this story, and several others that I collected, pointed to a convergence of two trends that would go mainstream in the 1990s: interest in UFOs and paranormal activity, and millennial fundamentalism.  The popularity of The X-Files gave a boost to the former, and the political ascendance of the latter is a reality that is still with us; in both cases, the Internet’s ability to connect like-minded people surely contributed to the trends.  The fact that “rational explanations” were forthcoming–pranksters confessed to faking UFOs with road flares tied to helium balloons, and the four missing women had undertaken a pilgrimage to Israel without telling anyone–makes it conveniently easy to dismiss the whole thing, leaving aside the question of why people get swept up in these manias in the first place. 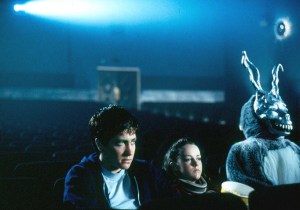 I don’t have an answer to that, at least nothing that would go beyond the volumes that sociologists and philosophers have already written.  Perhaps, in addition to my dramatic ambitions, I was simply trying to make sense of the data, like that other famous clipper, Charles Fort.  Fort spent years arranging the “damned facts,” weird happenings and sightings culled from newspapers from all over the world, into his four books; the cumulative force of his observations asserts a loose philosophy of skepticism toward both unsubstantiated myth and scientific orthodoxy, putting his faith in facts without jumping to conclusions about how they fit together.  The Internet has made it both easier and more difficult to follow the weird happenings in the world: easier because we have greater access than Fort, sitting at a table in the New York Public Library, could have imagined, and more difficult because of the sheer scope of the information available.  Ultimately, the lack of a definitive conclusion is what makes this sort of story less satisfying for dramatic purposes than we might desire: we’re left either exaggerating the reality of the aliens’ presence, as in a Hollywood blockbuster, or dismissing it altogether, as most outside observers would.  The ambiguity and misdirection, the need to believe without being able to prove anything, was something The X-Files would get right, for the most part, and as Donnie Darko would demonstrate, sometimes the most captivating aspect of a case like this isn’t a story at all, but a mood.

And with that, I leave you with Donald Erb’s 1969 composition The Seventh Trumpet, appropriate mood music for this article.