Note: This issue came out last week, but I was travelling, and it’s taken me a few days to get caught up. My apologies for the delay.

Kamandi, thrown from the towering heights of Mishkingrad by its former “Alpha” Grosnovo, and about to fall into the bear city’s atomic furnace, remembers that he is still holding the “cortex crown” that controls the city. Putting it on, Kamandi commands the metal around him (all parts of the great living city) to form a protective shell around him (similar to the vegetable shell Vila wove around him in no. 5) and take him to Renzi. There, he is astonished to see Renzi already surrounded by a band of female dog warriors, scavengers who periodically raid the bear city for technology and scrap metal. The dogs decide to take Kamandi along with them and throw him into a bag for transport. (They rescue Renzi as well, leaving the city of bears to collapse without Renzi’s atomic heart to power it.)

Later, Kamandi emerges from the bag to find himself on a huge dirigible, the floating headquarters of the “Bulldog Britanneks,” as the dogs call themselves. Beatrice, the leader of the Britanneks, recalls knowing Kamandi’s mother, a veteran of the “Android Wars” who designed their ship, and points Kamandi toward the last place she had seen her. 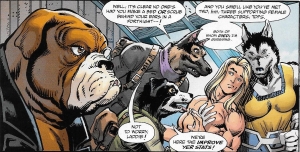 In the mean time, the dirigible floats over the forbidden wastelands of the North Pole, home to the “ice wizards.” The ice wizards (the only one we see is a polar bear) control hordes of “polar parasites,” metallic centipedes that latch onto unwilling hosts and control their minds, steering them to recruit more hosts. The ice wizards have been exiled to the wasteland and sense an opportunity to escape; for their part, the parasites are in constant search for new hosts and new territory. Directed by the ice wizard, a flying iceberg pierces the dirigible, bringing it down. One of the dog women, Sadie, rescues Kamandi from falling to his death; earlier she had flirted with him, but in this moment we sense that perhaps the attraction goes both ways.

On the ground, several of the Britanneks are overtaken by parasites, and with their minds controlled by them they begin attacking their fellows or attempting to lure them to be attacked by parasites. With their ship crashed and at the mercy of the parasites, the group retreats, but not before Kamandi finds the cortex crown among the wreckage. Since the dirigible was built from scrap looted from the bear city over the years, he reasons that the metal may still respond to the crown’s power, just as it had saved him earlier. A plan is hatched: the Britanneks lure the polar parasites and their hosts into the open, and then Kamandi, wearing the crown and driving a power-lifter-like exoskeleton made from the scrap, surprises the parasites, crushing them under the vehicle’s enormous “feet” and freeing the mind-controlled Britanneks as well. With the ice wizard captured (and disposed of off-panel?), the operation is a success.

The Britanneks, reunited, rebuild the remains of their dirigible into a hot-air balloon, while Kamandi, with a new lead on his missing parents, takes off separately in a hang-glider (after receiving a “first kiss” from Sadie). Gliding alone above the wasteland, Kamandi doesn’t notice one last polar parasite crawl out of his satchel, and the chapter ends with the creature biting him on the neck. Is this the end of Kamandi, or is he doomed to spend his remaining days as the host of the polar parasite?

As in other Kamandi stories, “Salvage” gets a lot of mileage out of comparing and contrasting human and animal behaviors and personality type. There are plenty of canine puns and references on hand (Kamandi “deworms” the parasite-infected Britanneks; the flying headquarters is referred to as a “doghouse” and later a “kennel,” and so on; it must have taken a lot of self-control to avoid the phrase “puppy love”). Most notably, while only Commander Beatrice is an actual bulldog, the group suggests the kind of plucky, diverse, but oh-so British commando troop one sees in movies about World War II, and Beatrice represents the typical funny animal English bulldog as a Winston Churchill stand-in: gruff, cigar-smoking, and (in this case) maternal. (“A Canterbury Tail/Calamity from the Clyde,” a two-part “Tale of the Great Disaster” printed in Weird War Tales nos. 51 and 52, makes a similar association between nationality, animal type, and character, but as we have seen that is almost de rigueur in funny animal stories, even ones like this that are darker than your average Carl Barks strip.) Naturally, the canine commandos are introduced playing poker when Kamandi is welcomed onto the dirigible.

Also striking in this story is that all the Britanneks are female, a conceit lampshaded by the engineer Mae who says of Kamandi when they meet, “You smell like you’ve met two, hm, three supporting female characters, tops–both of whom died, I’m guessing.” That sounds about right. I mostly know Marguerite Bennett, who wrote this chapter, from her work on DC Comics Bombshells, a series focused on the publisher’s female characters fighting an alternate World War II in a world without male superheroes. Although this chapter’s art (by Dan Jurgens and Klaus Janson, both of whom have been working in comics since I was reading them as a kid in the ’80s) is more old-school and less attuned to the feminine nuances of Bennett’s script than that of Bennett’s Bombshells collaborator Marguerite Sauvage, “Salvage” shows some of the same inventive remixing of wartime iconography and bantering sisterhood as her flagship series. Also, in addition to improving Kamandi’s representation stats the Britanneks have a more functional family dynamic than any group Kamandi has encountered since his abrupt expulsion from the Truman Show-esque small town in which he grew up, back in issue no. 1. Kamandi has made friends and allies, but the tough warrior women of the Britanneks are a family: they not only fight together, they care about each other, and their scenes are reminiscent of the Vuvalini in Mad Max: Fury Road.

Finally, Kamandi has traditionally been a series in which romance took a back seat to action and adventure; not exactly “no girls allowed,” but like many comics, the emphasis is on Kamandi’s status as “The Last Boy on Earth” (emphasis added). Mae commenting on the meager (and deceased) female supporting cast could easily be referring not only to this series but to Jack Kirby’s original book as well. The love of Kamandi’s life, Flower, a girl his age who could speak (in contrast to the mostly mute humans of Earth A.D.), was no sooner introduced than she was killed tragically; later Kirby, sensing a missed opportunity, introduced Flower’s twin, Spirit, but if Kamandi noticed Spirit’s hula-girl near-nakedness, he was too polite to say anything. That was for the pubescent audience. In this case, the flirtatious Sadie and her interest in Kamandi would be unexceptional were it not for the prospect of cross-species love in their relationship. Ultimately, their mutual attraction is turned into a cute joke, with Sadie slurping Kamandi’s face like any family pet. Whether a furry fantasy* or a riff on dogs’ age-old affection for man, the message is clear: even in the wastes of this post-apocalyptic world, it is love, and the possibility of finding it, that makes survival into living. 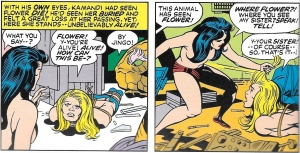 *Not to downplay the degree to which Kamandi can already be seen as a furry fantasy, but as I suggested, its generally chaste approach takes the focus off questions of romance or sexuality.