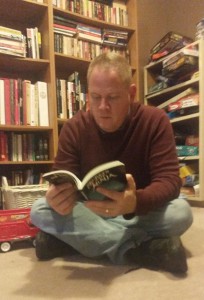 As the year draws to a close, it’s time for another post to summarize my activity in the past twelve months. As I did last year, I kept track of the books I read this year (I’ll look back on films I watched this year tomorrow). As before, I’ve only listed books I read from beginning to end (that’s why only one of the Robert E. Howard collections I wrote about in October is listed, the others having been read before). All were first-time reads (although I know I had read parts of American Humor before, but apparently not the whole thing), and I managed to keep my resolution to read more than I did last year, including some classics (hey, it turns out Moby Dick is a pretty good book!).

How does one summarize a year of reading activity? I don’t read by working through a list: I have books in mind that I want to get to, and I own a lot of books I haven’t read yet, but in general I let the last book I finished help me decide what to read next. Sometimes I continue along a certain track (several threads appeared in my reading this year, including books about the art and craft of writing; Wonder Woman and the fascinating behind-the-scenes story of her creator, psychologist and sex researcher William Moulton Marston; non-fiction on a variety of subjects; and several novels and collections of fiction).

After reading so much about Wonder Woman, the opportunity to pick up a set of reprints of her contemporary Phantom Lady made for a useful comparison. For one thing, it’s interesting to observe how much bondage and role-playing is in the wholesome Wonder Woman as opposed to the supposedly racier Phantom Lady; the difference is largely in that Moulton’s Wonder Woman presents its themes of domination and restraint from a playful perspective, and Harry G. Peter’s simple illustrations don’t draw quite as much as attention as Matt Baker’s famous “good girl” art (although in Classic Phantom Lady Volume Two, Jim Vadeboncoeur, Jr. makes a strong case that Baker drew much less Phantom Lady than he is usually credited with).

At other times, after spending time in a particular headspace, I’m ready for a change: I was eager to part company with “Walter,” the narrator of the Victorian sexual diary My Secret Life, after nearly 600 pages (and the original work was published in eleven volumes!). “Walter’s” escapades are by turns titillating, horrifying, and deeply sad, the book itself a mixture of Victorian letters to Penthouse, inadvertent social history, and pre-Freudian psychosexual analysis. Even abridged, it’s “everything you wanted to know about Victorian sex but were afraid to ask.”

That made Edmond Hamilton’s The Valley of Creation, a short and breezy pulp novel, a welcome palate-cleanser. I used to read such short novels frequently; although I enjoyed most of them, I also thought of them as research, fleshing out my picture of the pulp era and stocking up on plot and character formulas for future reference. I still have many on my shelves that I haven’t gotten to (many of them were boxed up until this year, when I got some new book shelves and was able to unpack them), so perhaps 2016 will be a year to renew my acquaintance with the diverse output of the pulps.

May
Guardian of the Gods, Mark Rodgers

August
The Pentagon: A History, Steve Vogel
The Interstellar Age: Inside the Forty-Year Voyager Mission, Jim Bell
Save the Cat!, Blake Snyder
Illegal Tender: Gold, Greed, and the Mystery of the Lost 1933 Double Eagle, David Tripp

September
The Orientalist, Tom Reiss
The Haunter of the Ring & Other Tales, Robert E. Howard

November
The Log of a Cowboy, Andy Adams
All the Wrong Questions: “Shouldn’t You Be in School?”, Lemony Snicket
The Disaster Artist: My Life Inside The Room, the Greatest Bad Movie Ever Made, Greg Sestero & Tom Bissell

So, readers, I ask you: what did you read this year? Did you meet any reading goals, and what do you look forward to reading in the new year?