Like something straight out of the hit film The Lawnmower Man, a futuristic digital simulacrum of author Stephen King manifested in one of the “overflow rooms” of the Hughes Metroplex at Wichita State University on Friday. King visited Wichita as part of the tour supporting his newest novel, Revival, and while I arrived early to hear him speak, I didn’t arrive quite early enough. The event (a reading from the new book, some prepared remarks, and a Q&A) was to start at 6 pm; having secured my ticket before they quickly sold out last month, I thought I’d head over to the Metroplex at about 5, giving myself plenty of time for travel and parking. Around 4:30, my wife noticed a Facebook post from a friend who was already there: the line was three quarters of the way around the building already. I hopped in the car and left, just barely finding a place to park. The line was fully around the building by this time (about 5), and many more people got in line after me. It took an hour for the line to wind back around, an hour of standing in near-freezing weather; at least it wasn’t raining or snowing. Quite a few people gave up and left, or didn’t bother queuing up when they saw the size of the crowd.

To make matters worse, the event was oversold: only the first 1700 ticket holders would be seated in the auditorium, and to get in the auditorium you had to have a wristband, which they started issuing at 4 pm. This information was on the event’s website, but not printed on the ticket:

Seating at the event is general admission. Once the Lowe Auditorium is full, the remaining attendees will be seated in overflow rooms with excellent, live audio / visual feed to Mr. King’s presentation.

So perhaps I was naive not to expect something like this, but based on the number of people who gave up, and the backlash mentioned in the Wichita Eagle‘s coverage of the event, I wasn’t the only one unpleasantly surprised. Needless to say, I was in the “overflow.”

But enough bitching. How was the presentation? It was fine: although King protested that he was terrified of large crowds and implied that he was at best a reluctant public speaker (supported by the fact that the Revival tour would only have six stops), he had an easy-going, conversational tone and was engaging and relaxed. A slight cold didn’t noticeably slow him down: he promised us it wasn’t ebola, and on that note observed that every time a new flu strain hit the news, sales of The Stand spiked. He sounded much like he writes, at least his non-fiction: I never once heard him use the word “fuckeroo” (although the sample he read from Revival did include “whoremaster,” another King standby). 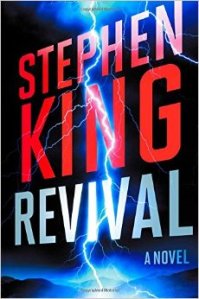 I’m more interested in King’s creative process than his books these days. That’s not to say I won’t read Revival, a copy of which was included with the ticket price. But even King’s diehard fans tend to take his books as they come these days, cherishing the good ones and shrugging off the disappointments as part of the cost of being a fan of this most prolific of authors. King is like a baseball player, grinding out a season’s worth of games, day in and day out, and even the Hall of Famers don’t hit home runs every time they go up to the plate.

The unevenness of King’s work has a lot to do with his intuitive approach and (reported) two thousand words a day: early on, King observed that he is “not an organized writer,” to which I responded “NO SHIT” in my notes. King said that every story begins with an image, and the process of writing is one of exploring the implications of that image and asking what happens next. He compared it to pulling a thread from a mouse hole: sometimes the thread is as short as a few pages’ worth of story, and sometimes it’s as long as a novel. And since King doesn’t know where it’s leading any more than the reader does, there’s always the possibility that the ending won’t be satisfying, or that it won’t be what he thought it would be when he began. Sometimes characters turn out to be stronger than he expected (he cited ‘Salem’s Lot, saying that his original plan was for the vampires to win), and sometimes they don’t make it. “I love a happy ending as much as anyone,” he said; “it’s just not always possible.”

I was aware of his general approach from his writing already: in addition to his memoir/handbook On Writing, King has often included writing and storytelling (and discussions of same) in his fiction, to the point that stories about writers are a significant subset of King’s work. As I wrote last summer, Misery, in addition to being a gripping story of suspense, is also something of a master class in writing as King surrogate Paul Sheldon thinks his way through the book that will preserve his life as a captive of his “biggest fan,” Annie Wilkes. Much of the imagery King uses to describe his process, such as seeing the story through a hole or window, is present in Misery and was still part of King’s discussion on Friday.

I suspect this is one reason King continues to fascinate long after his ideas are not only no longer shocking, but even familiar: his willingness to allow readers into his thought process, to show his tricks, to let them come along as if he needed their help in telling the story, is endearing. It’s also as much of a pose as that of the author who reveals nothing (such as John Irving, whom King said told him that he doesn’t begin a book until he knows what the last sentence will be, to which King responded, “Jeez Louise”), and I’m not naive enough to believe that King has completely laid it all on the table for his audience. Still, the sense that King’s personality comes through his writing is palpable, and longtime fans accept him as they accept old friends or family members, foibles and all.

One of the more interesting moments came during the Q&A: an audience member asked if King still slept with the light on, as he once claimed in an interview. King appeared to search for a memory of having said that, gave up, and finally said, “I’m a big boy now.” The audience laughed, and King segued into a bit that he had likely delivered before and clearly relished, drawing the audience into one of his stories: he pointed out that of all the people at the Metroplex, some of us had probably forgotten to lock our cars, and “anybody could climb into the back seat. And when you’re driving home and you look in the rear-view mirror”–he mimed a figure rising from the back seat–“‘objects may be closer than they appear.’ . . . But that probably won’t happen.” He continued, “And when you get home, and your house is all dark, you’ll go into the bathroom and see the shower curtain closed, and you’ll tell yourself, ‘I left it like that.’ . . . There probably won’t be anybody there.” We all laughed, and King laughed, too. “We’re all laughing,” he said, “but these things have a time release. Because some time tonight, you’re going to be alone, and it’s going to be dark, and then it won’t seem so funny.”