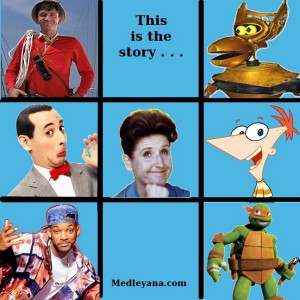 If it seems that the art of television theme music has made a comeback lately, it’s not just you.  As television has taken on more cinematic qualities and attracted viewers with higher production values and artier production (especially on premium cable and through such new outlets as Netflix’s original programming), the opening credits sequence and theme music have returned to prominence.  Just a few years ago, this wasn’t the case at all: networks tried to squeeze as much commercial time out of their programming as possible, as well as trying to avoid any lull—such as a lengthy opening—that might tempt viewers to click away.  Thus, we had a spate of super-brief openings like that of Lost or Better Off Ted, which were just a logo and a chord or two at most.  In 2010, the Emmy Awards nearly eliminated the award for Outstanding Main Title Theme, leading to a lot of hand-wringing about the end of an era.  However, as critic Robert Lloyd pointed out in the Los Angeles Times, memorable themes were continuing to be written, just not for prestigious prime-time genres: tween programming and cartoons carried the torch for the theme song even in those dark days.  Ultimately the award was kept, and there has been a bounce back to more lavish opening sequences since then.

However, one subgenre of television music has mostly remained dormant (with a few exceptions): the expository “story song” that describes the premise and characters of the show in detail in the manner of a Shakespearean prologue (even if the shows themselves were hardly highbrow).  Many of the most iconic TV themes from the 1960s, the “golden age” of the expository TV theme, fit this description: The Beverly Hillbillies (1962), Gilligan’s Island (1964), and The Brady Bunch (1969) all have memorable, catchy songs that bring viewers up to speed, whether watching for the first or the fiftieth time (dates given for these and all series mentioned are premiere dates only).  Admit it: you’re probably hearing one of these songs in your mind right now, aren’t you?

One might expect such elaborate theme songs to be a holdover from the days of radio programming, but that appears not to be the case. In fact, a cursory survey of radio show themes turns up far more introductions consisting of an instrumental theme with a voiceover by an announcer, a format mostly found on late-night talk shows today.  In fact, with a few exceptions, the songs repeated week-to-week on the radio usually sang the praises of the show’s sponsor, placing them squarely in the history of commercial jingles rather than theme songs.

The mania for story-telling TV themes appears to coincide with the popularity of ballads in general in popular music: Fess Parker’s “The Ballad of Davy Crockett,” used as the theme song for The Adventures of Davy Crockett in 1954, reached No. 1 on the U. S. pop chart the following year.  While ballads shared the pop charts with dance crazes, standards, and rock ‘n’ roll, there was no shortage of hit songs in the format: Johnny Horton’s “The Battle of New Orleans” in 1959 and, later, Staff Sergeant Barry Sadler’s “The Ballad of the Green Berets” (1966).  “The Beverly Hillbillies” fit firmly within this tradition.*  As late as 1981, the short-lived Open All Night featured what is probably the densest summary of a character’s life story to be found in a TV theme:

It’s no surprise that the expository format was most often used for comedies (although not only “situation” comedies, as we shall see) and adventure shows, two genres that lend themselves to “high concept” approaches.  While adventure shows continued to explain their premises into the 1970s and ‘80s (often through voiceover, as in the introductions to The Six Million Dollar Man (1973), Charlie’s Angels (1976), The Incredible Hulk (1978), and Quantum Leap (1989), to name just a few), comedies began to adapt an impressionistic, low-key approach, using songs that described a mood rather than a situation (a long-lasting trend that covered at least three decades’ worth of programs, including the themes to Taxi (1978), Cheers (1982), and Friends (1994)—maybe it has something to do with one-word titles?).  The theme to WKRP in Cincinnati (1978) is almost in this category, although it’s clear enough from its lyrics that it’s set at a radio station; compare it to the themes for later radio-bound sitcoms NewsRadio (a purely instrumental theme, 1995) and Frasier (a show about tossed salad and scrambled eggs, 1993).**

Interestingly, as storytelling songs declined in pop music, they continued to be prominent in rap and country, both genres that exploded in popularity in the 1990s.  The Fresh Prince of Bel Air, which began airing in 1990, was developed around the likable persona of Will “Fresh Prince” Smith, already known for a family-friendly rap style that spun shaggy-dog stories out of the foibles and ironies of everyday life.  The theme song he and producer Quincy Jones came up with is spun directly out of his act and sets up the fish-out-of-water comedy that was the show’s bread and butter in early seasons. (At almost three minutes, the song is fully as long as a typical pop song, and was edited to be much shorter after the first few episodes; effectively, the opening credits sequence was like an introductory music video.)

There are many, many theme songs for cartoon shows from the 1980s that have expository qualities; a large number of them appear to take Kenny Loggins’ “Danger Zone” as their model.  The theme for Teenage Mutant Ninja Turtles is among the most detailed, describing how the four title characters came to be, naming them individually and describing the qualities they bring to the team (not to mention their love of partying, dude). When the series was resurrected in 2012, the theme song was remade in a more current style, with the lyrics turned into a rap that fits in even more narrative detail.

Indeed, as Robert Lloyd alluded to, the expository theme song is common for children’s programming in general.  Whether this reflects the practical realities of syndication (which makes it even more likely that any episode could be a viewer’s first) or television executives’ dim view of a younger audience’s ability to follow in-context clues I couldn’t say, but anecdotal evidence suggests the latter.

In any case, it is striking to consider how many expository theme songs, both for children and adults, begin with the words “This is the story . . . “ or some variation thereof.  It invites the viewer to settle in and enter the world and mindset of the narrative, and in some cases it’s a literal invitation to “come inside” or “come along,” as if the show were a real place, just on the other side of the television screen.  The introduction to Pee-Wee’s Playhouse (1986) takes that premise about as far as it can go, not only with the opening invitation and the lyrical inclusion of the many, many characters on the show, but with a wordless, “Quiet Village”-style introductory section that further separates the ordinary world outside the Playhouse from the manic sugar-high to be found within.

The extent to which these songs have penetrated the collective memory is evident in the number of parodies and remakes that have been done, and secondary references in movies and other TV shows.  They have the quality of received folklore, which is perhaps part of their cyclical appeal: as kids for whom they are part of their childhood grow up and move into positions of influence in media, a new crop of explanatory story-songs are composed for television shows that reflect their experience.  In the late 1980s, comedy game show Remote Control (1987) and bad-movie powerhouse Mystery Science Theater 3000 (1988) both drew on this tradition (interestingly, both centered on the viewer’s relationship to the media, its influence, and the desire to reshape or talk back to it; the stock footage-driven Dream On (1990) fit a similar pattern, although it was introduced with a wordless opening-credits sequence rather than a song).  MST3K’s theme song is quite possibly the ultimate example of the genre, not just for its breakdown of the show’s premise and “robot roll call” but for its trope-defining final couplet: “If you’re wondering how he eats and breathes and other science facts, then repeat to yourself, ‘It’s just a show, I should really just relax.’”

Now, the generation that came of age with those programs is making its mark and bringing back the expository theme song, particularly in animation, with such programs as Phineas and Ferb (2007), Adventure Time (2010), and Sanjay and Craig (2013).  Outside of their theme songs, these shows make frequent use of songs in montage; the humor found in the “literal” narration, baldly describing events that can be seen occurring onscreen, hearkens back to the theme for It’s Garry Shandling’s Show (1986), another late ‘80s touchstone that challenged classic sitcom structure by calling attention to it at every possible turn.

Will the expository theme song return to prime time?  It doesn’t seem likely right now, but who knows?  Perhaps the kids watching Disney, Nick, and Cartoon Network today will become the creators and composers of tomorrow and continue the cycle.

* This leaves aside programs based on popular songs, of which there were several: Harper Valley PTA (1981) was a spinoff from a 1978 movie, based on a hit song from ten years before; a number of holiday specials have been based on narrative songs, most notably “Rudolph the Red-Nosed Reindeer” and “Frosty the Snowman,” but also including “Grandma Got Run Over by a Reindeer.”  Naturally, the songs that inspired these programs were used as themes.

** Not to dismiss those theme songs, of course, but they have a different function, exploring the theme or character of their show rather than the plot.