You can read Parts One, Two and Three here, here and here.

In the foreword to the trade paperback edition of her late husband’s magnum opus Squadron Supreme, Catherine Gruenwald writes,

Mark always liked when I read his work, and he waited until the exact right time to unleash this particular story upon me.  In 1993, I was conveniently laid up for a week recovering from a minor surgical procedure, and he quietly decided this was the perfect time.  It did make the most of my captive-audience status, but it also made the recuperating process more pleasant as I breezed through each issue, especially without the usual wait between installments experienced by readers who caught it the first time out.  I thought about all those kids who read through stacks of comic books as they suffered through weeks of broken-leg mending and measles bouts.  Mark saw to it that I came into fandom the way others of our generation had!

My version of that experience came when I was in seventh grade and contracted Legionnaire’s disease.  I was hospitalized for two weeks and was significantly weakened by the illness.  I couldn’t talk or laugh too much without suffering coughing fits, and even getting up to walk around left me winded.  In the hospital I was in an oxygen tent and took treatments by inhalation at regular intervals, even during the night. (Incidentally, whatever the phrase “night nurse” might suggest to you, my experience didn’t live up to it.)  Although I wouldn’t recommend that method of immersion, I have one fond memory of that period thanks to a timely gift from my grandparents: The Smithsonian Collection of Newspaper Comics, edited by Bill Blackbeard and Martin Williams, which I devoured between treatments and brief visits from friends. 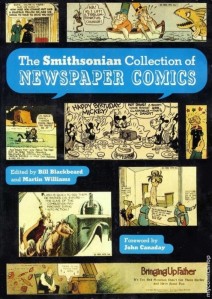 My mother’s parents had enabled my comics addiction quite a bit over the years: A Smithsonian Book of Comic-Book Comics had been a birthday gift the previous year (they lived in Arlington, Virginia, just outside Washington, D.C., so I received a lot of Smithsonian-themed gifts), and they always saved the color Sunday comics sections from the Washington Post for my sister and me to read when we visited.  The Post carried more and newer comic strips than my hometown paper, so I had the inside track on stuff like The Far Side and Calvin and Hobbes, and would try to describe these creative, mind-blowing works of art to my sometimes skeptical friends.  When those comics were picked up by the Pittsburg (Kansas) Morning Sun, their first daily installments invariably underwhelmed my friends.  The first Far Side to run in my hometown was, I think, the “Thor’s hammer, screwdriver, and crescent wrench” panel that even Gary Larson couldn’t explain.  Others, like Bloom County, were never carried in my hometown paper at all.

Gary Larson’s plot to destroy my credibility, Exhibit A

The boundaries between newspaper comics and comic books were quite porous, both historically and in my experience.  I started off reading the newspaper strips from a young age, the kid-oriented ones like Winnie the Pooh at first, gradually expanding my range until I was even reading the soap-opera strips, grown-up adventures, and even the political cartoons on the editorial page.  I enjoyed the adventures of time-traveling caveman Alley Oop, and the globetrotting fisticuffs of Captain Easy, another legacy from the comic strips’ Depression-era golden age. Paperback collections of favorites like Peanuts, The Family Circus, and Garfield were among the first books I owned.  By seventh grade, I was serious about reading and collecting comic books, but I still read the newspaper strips and I was starting to think of myself as a student of the medium.  According to my parents, I even asked for the daily paper while I was in the hospital, so I could keep up (I don’t remember that, but I admit it sounds like me).

The best stories in the Smithsonian collection, adventures like the “Plunder Island” saga in Thimble Theatre (the home of Popeye), delivered the same combination of thrills, humor and pathos that I associated with movies like Star Wars and Raiders of the Lost Ark.  In hindsight it’s obvious why: George Lucas and Steven Spielberg were Baby Boomers, born in the mid-‘40s, rather than children of the Depression, but they obviously shared a love for movie serials and pulp novels and channeled the same sense of wonder and excitement into their original creations.  And they fit into a larger pattern: the years in which I grew up, the 1970s and ‘80s, were the crest of a wave of interest in the popular culture of the 1930s and ‘40s.  In addition to homages like Indiana Jones that hearkened back to the pulp era, the original characters from magazines, comic books and strips, radio shows, and serials were being repackaged for modern audiences or brought back to life in new formats: during my childhood there were big screen or TV adaptations of Conan the Barbarian, Popeye, Flash Gordon, Little Orphan Annie, and Buck Rogers, not to mention the ever-present superheroes whose roots went back to the same time period.  There was even a Doc Savage movie, although I’ll admit I haven’t seen it.

Whether I enjoyed the strips because I had been prepared by the resurgence of Depression-era culture or would have enjoyed them for their own sake without being primed is beside the point.  It was, I felt, material I needed to read, and that I encountered at the right time: it was the real stuff.  The Smithsonian Collection of Newspaper Comics fit my adolescent concept of reading as mastery perfectly: I was old enough to take the book seriously, reading it cover to cover, including the informative but not too academic prose accompanying the strips, but I was young and unoccupied enough to lose myself completely in the detailed artwork and the lengthy excerpts from Thimble Theatre, Mickey Mouse, and Dick Tracy.

Perhaps that’s the best explanation for the obsessions that grip us in the early teen years: what else did I have going on? Like those bedridden kids Catherine Gruenwald alludes to, I was in an ideal environment to be completely absorbed by my reading.  All my needs were taken care of.  Everything was new to me, so I had a greater tolerance for the lulls that beset any collection than I do now: back then, even the boring parts contributed to the overall design, set the baseline against which I judged the really superior stuff.  Now I have children of my own, and even when I have the time to read deeply it’s harder to access the state of complete absorption that I experienced then.  There are just too many other things occupying my mind; that’s the condition of adulthood.

The New Smithsonian Book of Comic Book Stories, edited by Bob Callahan, was published a few years ago, a follow-up to Barrier and Williams’ volume.  I eventually purchased it, but I haven’t read the whole thing.  In part it’s because I’m already more familiar with the territory it covers, from the 1960s to the present, and I’ve read more of the stories that it reprints.  It could be the mixed-up pages, an off-putting production error that makes the book less authoritative than was obviously hoped.  Perhaps the sheer variety of comics that have been created since the 1960s make it more difficult for any one book to be comprehensive.  But it’s also because of that difficulty of finding time and recapturing youthful engagement that I’ve alluded to.  I’ll pick it up, read a few pages, and put it back on the shelf.  Even if I read every page, it won’t be with the kind of rapt attention I gave the two previous Smithsonian books.  And that’s okay: one of the chief pleasures of the anthology, and one I haven’t put nearly enough focus on, is the freedom to browse, to pick and choose, to be selective.  It isn’t a novel or a textbook that needs to be read in sequence, even though I, like many youthful readers, would treat it that way.

I recall my mother sitting in the hospital room with me, keeping watch, and the realization of what my illness must have been like for my parents hits home in a way that didn’t even occur to me before I had kids (according to my parents, the scariest part was not having a diagnosis for the first week of my hospitalization).  My mother would read too, usually a mystery novel, along with crossword puzzles and cross-stitching: there wasn’t much else to do.  My father would come during visiting hours, but he confirmed that he, also, would read during his down time, sitting in our empty house.  It sounds lonely, and maybe a little scary, but it was actually comforting: that’s kind of the way it was at home when we were together anyway, separated by our different reading but joined by a common activity.  The books that comforted me weren’t the same as my parents’ books; I’ve encouraged my children to read, and to read comics, but I won’t insist that they read the same books I treasured.  I hope they will, but it’s more important that, like me, they find the books they need, when they need them.